NASA's New Mars Camera Gives Dramatic View of Planet
Mars is ready for its close-up. The highest-resolution camera ever to orbit Mars is returning low-altitude images to Earth from NASA's Mars Reconnaissance Orbiter.

Rocks and surface features as small as armchairs are revealed in the first image from NASA's Mars Reconnaissance Orbiter since the spacecraft maneuvered into its final, low-altitude orbital path. The imaging of the red planet at this resolution heralds a new era in Mars exploration. 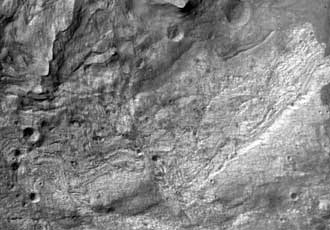 The image of a small fraction of Mars' biggest canyon reached Earth on Friday, the beginning of a week of tests for the High Resolution Imaging Science Experiment and other instruments on NASA's Mars Reconnaissance Orbiter.

"We are elated at the sharpness of the image, revealing such fine detail in the landscape," said Dr. Alfred McEwen of the University of Arizona, Tucson, who is the principal investigator for this camera. The target area includes the deepest part of Ius Chasma, one portion of the vast Valles Marineris canyon. Valles Marineris is the largest known canyon in the solar system, as long as the distance from California to New York.

The camera returned test images after Mars Reconnaissance Orbiter went into orbit around Mars on March 10, 2006, but those were from altitudes more than eight times as high as the orbiter is flying now. Since March, the spacecraft has shrunk its orbit by dipping more than 400 times into the top of the Martian atmosphere to shave velocity. It is now flying in its final, nearly circular orbit at altitudes of 250 to 316 kilometers (155 to 196 miles). The orbit will remain this shape and size for the mission's two-year primary science phase, which begins in November.

During its primary science phase, Mars Reconnaissance Orbiter will return more data about the red planet than all previous missions combined, pouring data to Earth at about 10 times the rate of any earlier Mars spacecraft. Scientists will analyze the information to gain a better understanding of the distribution and history of Mars' water -- whether ice, vapor or liquid -- and of the processes that formed and modified the planet's surface. 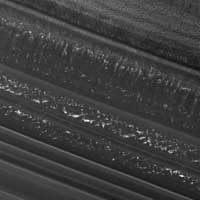 In addition to the high-resolution camera, the orbiter's science payload includes a mineral-identifying spectrometer, a ground-penetrating radar, a context camera for imaging wide swaths of the surface, a wide-angle color imager for monitoring the entire planet daily, and an instrument for mapping and monitoring water vapor and other constituents in the atmosphere.

For most of October, Mars will be passing nearly behind the sun from Earth's perspective. Communication will be intermittent. Activities will be minimal for Mars Reconnaissance Orbiter and other spacecraft at Mars during this time, and they will resume in early November.

Information about the Mars Reconnaissance Orbiter is online at http://www.nasa.gov/mro. The mission is managed by NASA's Jet Propulsion Laboratory, a division of the California Institute of Technology, Pasadena, for the NASA Science Mission Directorate, Washington. Lockheed Martin Space Systems, Denver, is the prime contractor and built the spacecraft. The High Resolution Imaging Science Experiment is operated by the University of Arizona and the instrument was built by Ball Aerospace and Technology Corp., Boulder, Colo.