NASA Mars Reconnaissance Orbiter Reaches Planned Flight Path
NASA's newest spacecraft at Mars has completed the challenging half-year task of shaping its orbit to the nearly circular, low-altitude pattern from which it will scrutinize the planet.

The Mars Reconnaissance Orbiter fired its six intermediate-size thrusters for 12.5 minutes Monday afternoon, Sept. 11, shifting the low point of its orbit to stay near the Martian south pole and the high point to stay near the north pole.? The altitude of the orbit ranges from 250 kilometers (155 miles) to 316 kilometers (196 miles) above the surface. 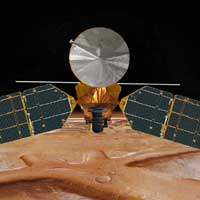 "This maneuver puts us into our science orbit," said Dan Johnston, deputy mission manager at NASA's Jet Propulsion Laboratory, Pasadena, Calif. "Getting to this point is a great achievement." Challenging activities remain ahead this month, such as deploying an antenna 10 meters (33 feet) long and removing a lens cap from a crucial instrument. The main science investigations will begin in November. During its two-year science phase, the mission will return more data about Mars than all previous Mars missions combined.

The flight team for the Mars Reconnaissance Orbiter sent the bus-sized spacecraft through the upper fringe of Mars' atmosphere 426 times between early April and Aug. 30.? This "aerobraking" technique used friction with the Martian atmosphere to gradually decrease the highest-altitude point of the elliptical orbit from 45,000 kilometers (28,000 miles) to 486 kilometers (302 miles).?The lowest-altitude point during aerobraking ranged from 98 to 105 kilometers (61 to 65 miles). It was carefully managed with input from researchers at JPL; Lockheed Martin Space Systems, Denver; NASA Langley Research Center, Hampton, Va.,?and elsewhere, based on spacecraft data and atmospheric fluctuations.

During the first three weeks after it arrived at Mars on March 10, the spacecraft took more than 35 hours to fly each very elongated orbit. During the final weeks of aerobraking, it was flying more than 10 orbits each day. "The pace of work got extremely demanding as we got down to two-hour orbits," Johnston said. "We had shifts working around the clock."

Monday's maneuver was the mission's biggest burn since the 27-minute firing to slow the spacecraft enough for Mars' gravity to snare it into orbit on March 10. The benefit of aerobraking is to avoid hauling unnecessary fuel to Mars for thrusters. Compared with relying solely on thruster firings to shrink and shape the orbit, aerobraking cut the mission's fuel needs by about 600 kilograms (about 1,300 pounds.) At least one small adjustment maneuver is still ahead.

One key remaining preparation for the mission's science payload is deployment of the antenna for the Shallow Subsurface Radar, an instrument provided by the Italian Space Agency. The antenna, developed by Northrop Grumman Space Technology Astro Aerospace, Carpinteria, Calif., remained safely stowed during aerobraking. Later this month, it will be released to unfold itself and extend 5 meters (16.4 feet) on either side of the spacecraft. After this ground-penetrating radar has been checked and calibrated, it "has the potential to detect buried channels, buried craters and ice layers," said Dr. Roberto Seu of the University of Rome La Sapienza, leader of the instrument's science team.

During aerobraking, a lens cap protected the mission's mineral-mapping Compact Reconnaissance Imaging Spectrometer for Mars. Removal of the cap this month will allow researchers to start checking and calibrating the spectrometer's performance. "Our most important goal is to find where past environments on Mars were wet long enough to leave a mineral signature on the surface," said Dr. Scott Murchie of Johns Hopkins University Applied Physics Laboratory, Laurel, Md., principal investigator for the spectrometer.

A series of trial observations by all the instruments will complete the spacecraft checkouts at the end of the month, including tests of all observing modes.?In addition to data acquisition by the radar and spectrometer, images will be taken by the High Resolution Imaging Science Experiment and the Context Imager.?The Mars Color Imager and Mars Climate Sounder will also begin monitoring Mars' atmosphere.?During the next four years, these instruments on Mars Reconnaissance Orbiter will examine Mars to learn about processes that have affected it and to inspect potential landing sites for future missions. The spacecraft will also serve as a communications relay for Mars surface missions.

Information about the Mars Reconnaissance Orbiter is online at http://www.nasa.gov/mro . The mission is managed by JPL, a division of the California Institute of Technology, Pasadena, for the NASA Science Mission Directorate, Washington. Lockheed Martin Space Systems, Denver, is the prime contractor and built the spacecraft.