Images taken by the orbiter's Context Camera and Mars Color Imager during the first tests of those instruments at Mars confirm the performance capability of the cameras. The test images were taken from nearly 10 times as far from the planet as the spacecraft will be once it finishes reshaping its orbit. Test images from the third camera of the science payload were released previously. 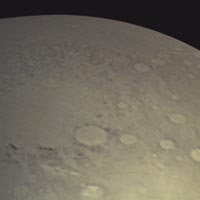 "The test images show that both cameras will meet or exceed their performance requirements once they're in the low-altitude science orbit. We're looking forward to that time with great anticipation," said Dr. Michael Malin of Malin Space Science Systems, San Diego. Malin is team leader for the context camera and principal investigator for the Mars Color Imager.

The cameras took the test images two weeks after the orbiter's March 10 arrival at Mars and before the start of "aerobraking," a process of reshaping the orbit by using controlled contact with Mars' atmosphere. This week, the spacecraft is dipping into Mars' upper atmosphere as it approaches the altitude range that it will use for shrinking its orbit gradually over the next six months.

The orbiter is currently flying in very elongated loops around Mars. Each circuit lasts about 35 hours and takes the spacecraft about 27,000 miles (43,000 kilometers) away from the planet before swinging back in close.

On Wednesday, a short burn of intermediate sized thrusters while the orbiter was at the most distant point nudged the spacecraft to pass from approximately 70 miles (112 kilometers) to within 66 miles (107 kilometers) of Mars' surface.

"This brings us well into Mars' upper atmosphere for the drag pass and will enable the mission to start reducing the orbit to its final science altitude," said Dan Johnston of NASA's Jet Propulsion Laboratory, Pasadena, Calif., deputy mission manager.

After hundreds of passes through the upper atmosphere, the drag will gradually reduce the far point of the orbit until the spacecraft is in a nearly circular orbit every two hours.

After the spacecraft gets into the proper orbit for its primary science phase, the six science instruments on board will begin their systematic examination of Mars. The Mars Color Imager will view the planet's entire atmosphere and surface every day to monitor changes in clouds, wind-blown dust, polar caps and other variable features.

Images from the Context Camera will have a resolution of 20 feet (6 meters) per pixel, allowing surface features as small as a basketball court to be discerned. The images will cover swaths 18.6 miles (30 kilometers) wide.

The Context Camera will show how smaller areas examined by the High Resolution Imaging Science Experiment Camera -- which will have the best resolution ever achieved from Mars orbit -- and by the mineral-identifying Compact Reconnaissance Imaging Spectrometer fit into the broader landscape. It will also allow scientists to watch for small-scale changes, such as newly cut gullies, in the broader coverage area.

NASA's Mars Reconnaissance Orbiter is managed by JPL, a division of the California Institute of Technology, Pasadena, for the NASA Science Mission Directorate, Washington. Lockheed Martin Space Systems, Denver, is the prime contractor.