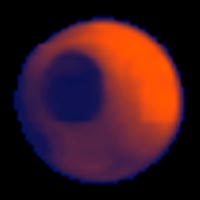 Image right: This image indicates that heat is being emitted from both the day side and the night side of Mars. The polar cap is dark in this image because it is cold and emits less heat than surrounding areas. The browse image shows more views of Mars seen in different wavelengths. Image credit: NASA/JPL-Caltech
+ Full image and caption
+ Browse version of image

Three weeks after successfully entering orbit around Mars, the spacecraft is in a phase called "aerobraking." This process uses friction with the tenuous upper atmosphere to transform a very elongated 35-hour orbit to the nearly circular two-hour orbit needed for the mission's science observations.

The orbiter has been flying about 426 kilometers (265 miles) above Mars' surface at the nearest point of each loop since March 10, then swinging more than 43,000 kilometers (27,000 miles) away before heading in again. While preparing for aerobraking, the flight team tested several instruments, obtaining the orbiter's first Mars pictures and demonstrating the ability of its Mars Climate Sounder instrument to track the atmosphere's dust, water vapor and temperatures.

On Thursday, Mars Reconnaissance Orbiter fired its intermediate thrusters for 58 seconds at the far point of the orbit. That maneuver lowered its altitude to 333 kilometers (207 miles) when the spacecraft next passed the near point of its orbit, at 6:46 a.m. Pacific time today (9:46 a.m. Eastern Time).

"We're not low enough to touch Mars' atmosphere yet, but we'll get to that point next week," said Dr. Daniel Kubitschek of NASA's Jet Propulsion Laboratory, Pasadena, Calif., deputy leader for the aerobraking phase of the mission.

The phase includes about 550 dips into the atmosphere, each carefully planned for the desired amount of braking. At first, the dips will be more than 30 hours apart. By August, there will be four per day.

"We have to be sure we don't dive too deep, because that could overheat parts of the orbiter," Kubitschek said. "The biggest challenge is the variability of the atmosphere."

Readings from accelerometers during the passes through the atmosphere are one way the spacecraft can provide information about upward swelling of the atmosphere due to heating.

The Mars Climate Sounder instrument also has the capability to monitor changes in temperature that would affect the atmosphere's thickness. "We demonstrated that we're ready to support aerobraking, should we be needed," JPL's Dr. Daniel McCleese, principal investigator for the Mars Climate Sounder, said of new test observations.

Infrared-sensing instruments and cameras on two other Mars orbiters are expected to be the main sources of information to the advisory team of atmospheric scientists providing day-to-day assistance to the aerobraking navigators and engineers. "There is risk every time we enter the atmosphere, and we are fortunate to have Mars Global Surveyor and Mars Odyssey with their daily global coverage helping us watch for changes that could increase the risk," said JPL's Jim Graf, project manager for the Mars Reconnaissance Orbiter.

Using aerobraking to get the spacecraft's orbit to the desired shape, instead of doing the whole job with thruster firings, reduces how much fuel a spacecraft needs to carry when launched from Earth. "It allows you to fly more science payload to Mars instead of more fuel," Kubitschek said.

Once in its science orbit, Mars Reconnaissance Orbiter will return more data about the planet than all previous Mars missions combined. The data will help researchers decipher the processes of change on the planet. It will also aid future missions to the surface of Mars by examining potential landing sites and providing a high-data-rate communications relay.

Test observations from the Mars Climate Sounder, other images and additional information about Mars Reconnaissance Orbiter are available online at http://www.nasa.gov/mro and at http://marsprogram.jpl.nasa.gov/mro .

For information about NASA and agency programs on the Web, visit http://www.nasa.gov .