NASA's New Mars Orbiter Returns Test Images
The first test images of Mars from NASA's newest spacecraft provide a tantalizing preview of what the orbiter will reveal when its main science mission begins next fall. 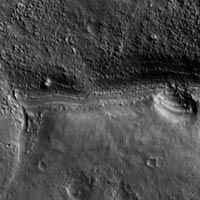 Image right: This view shows a full-resolution portion of the first image of Mars taken by the High Resolution Imaging Science Experiment camera. The camera took this first test image from orbit on March 24, 2006, from an altitude of 2,489 kilometers (1,547 miles). Image credit: NASA/JPL-Caltech/University of Arizona
+ Full image and caption
+ Broader view of first image

Three cameras on NASA's Mars Reconnaissance Orbiter were pointed at Mars at 8:36 p.m. PST Thursday, while the spacecraft collected 40 minutes of engineering test data. The cameras are the High Resolution Imaging Science Experiment, the Context Camera and the Mars Color Imager.

"These high-resolution images of Mars are thrilling, and unique given the early morning time-of-day. The final orbit of Mars Reconnaissance Orbiter will be over Mars in the mid-afternoon, like Mars Global Surveyor and Mars Odyssey," said Alfred McEwen, University of Arizona, Tucson, principal investigator for the orbiter's High Resolution Imaging Science Experiment camera.

"These images provide the first opportunity to test camera settings and the spacecraft's ability to point the camera with Mars filling the instruments’ field of view," said Steve Saunders, the mission's program scientist at NASA Headquarters. "The information learned will be used to prepare for the primary mission next fall." The main purpose of these images is to enable the camera team to develop calibration and image-processing procedures such as the precise corrections needed for color imaging and for high-resolution surface measurements from stereo pairs of images.

To get desired groundspeeds and lighting conditions for the test images, researchers programmed the cameras to shoot while the spacecraft was flying about 2,489 kilometers (1,547 miles) or more above Mars' surface, about nine times the range planned for the orbiter's primary science mission. Even so, the highest resolution of about 2.5 meters (8 feet) per pixel – an object 8 feet in diameter would appear as a dot -- is comparable to some of the best resolution previously achieved from Mars orbit.

Further processing of the images during the next week or two is expected to combine narrow swaths into broader views and show color in some portions.

The Mars Reconnaissance Orbiter has been flying in elongated orbits around Mars since it entered orbit on March 10. Every 35 hours, it has swung about 44,000 kilometers (27,000 miles) away from the planet then come back within about 425 kilometers (264 miles) of Mars' surface.

Mission operations teams at NASA's Jet Propulsion Laboratory, Pasadena, Calif, and at Lockheed Martin Space Systems, Denver, continue preparing for aerobraking. That process will use about 550 careful dips into the atmosphere during the next seven months to shrink the orbit to a near-circular shape less than 300 kilometers (200 miles) above the ground.

More than 25 gigabits of imaging data, enough to nearly fill five CD-ROMs, were received through NASA's Deep Space Network station at Canberra, Australia, and sent to JPL. They were made available to the camera teams at the University of Arizona Lunar and Planetary Laboratory and Malin Space Science Systems, San Diego, Calif.

Preliminary images from the High Resolution Imaging Science Experiment and additional information about the Mars Reconnaissance Orbiter are available online at: http://www.nasa.gov/mro or http://HiRISE.lpl.arizona.edu

Additional processing has begun for release of other images from the test in coming days.

For information about NASA and agency programs on the Web, visit: http://www.nasa.gov

JPL, a division of the California Institute of Technology in Pasadena, manages the Mars Reconnaissance Orbiter for NASA's Science Mission Directorate, Washington. Lockheed Martin Space Systems is the prime contractor for the project and built the spacecraft.