NASA's Next Leap in Mars Exploration Nears Arrival
As it nears Mars on March 10, a NASA spacecraft designed to examine the red planet in unprecedented detail from low orbit will point its main thrusters forward, then fire them to slow itself enough for Mars' gravity to grab it into orbit. 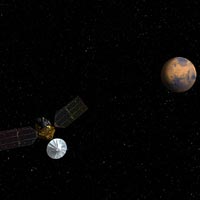 Ground controllers for Mars Reconnaissance Orbiter expect a signal shortly after 1:24 p.m. Pacific time (4:24 p.m. Eastern time) that this mission-critical engine burn has begun. However, the burn will end during a suspenseful half hour with the spacecraft behind Mars and out of radio contact.

"This mission will greatly expand our scientific understanding of Mars, pave the way for our next robotic missions later in this decade, and help us prepare for sending humans to Mars," said Doug McCuistion, Director of NASA's Mars Exploration Program. "Not only will Mars Science Laboratory's landing and research areas be determined by the Mars Reconnaissance Orbiter, but the first boots on Mars will probably get dusty at one of the many potential landing sites this orbiter will inspect all over the planet."

The orbiter carries six instruments for studying every level of Mars from underground layers to the top of the atmosphere. Among them, the most powerful telescopic camera ever sent to a foreign planet will reveal rocks the size of a small desk. An advanced mineral-mapper will be able to identify water-related deposits in areas as small as a baseball infield. Radar will probe for buried ice and water. A weather camera will monitor the entire planet daily. An infrared sounder will monitor atmospheric temperatures and the movement of water vapor.

The instruments will produce torrents of data. The orbiter can pour data to Earth at about 10 times the rate of any previous Mars mission, using a dish antenna 3 meters (10 feet) in diameter and a transmitter powered by 9.5 square meters (102 square feet) of solar cells. "This spacecraft will return more data than all previous Mars missions combined," said Jim Graf, project manager for Mars Reconnaissance Orbiter at NASA's Jet Propulsion Laboratory, Pasadena, Calif.

Scientists will analyze the information to gain a better understanding of changes in Mars' atmosphere and the processes that have formed and modified the planet's surface. "We're especially interested in water, whether it's ice, liquid or vapor," said JPL's Dr. Richard Zurek, project scientist for the orbiter. "Learning more about where the water is today and where it was in the past will also guide future studies about whether Mars has ever supported life."

A second major job for Mars Reconnaissance Orbiter, in addition to its own investigation of Mars, is to relay information from missions working on the surface of the planet. During its planned five-year prime mission, it will support the Phoenix Mars Scout, which is being built to land on icy soils near the northern polar ice cap in 2008, and the Mars Science Laboratory, an advanced rover under development for launch in 2009.

However, before Mars Reconnaissance Orbiter can begin its main assignments, it will spend half a year adjusting its orbit with an adventurous process called aerobraking. The initial capture by Mars' gravity on March 10 will put the spacecraft into a very elongated, 35-hour orbit. The planned orbit for science observations is a low-altitude, nearly circular, two-hour loop. To go directly into an orbit like that when arriving at Mars would have required carrying much more fuel for the main thrusters, requiring a larger and more expensive launch vehicle and leaving less payload weight for science instruments. Aerobraking will use hundreds of carefully calculated dips into the upper atmosphere -- deep enough to slow the spacecraft by atmospheric drag, but not deep enough to overheat the orbiter.

"Aerobraking is like a high-wire act in open air," Graf said. "Mars' atmosphere can swell rapidly, so we need to monitor it closely to keep the orbiter at an altitude that is effective but safe." Current orbiters at Mars will provide a daily watch of the lower atmosphere, an important example of the cooperative activities between missions at Mars.

Additional information about Mars Reconnaissance Orbiter is available online at:

The mission is managed by JPL, a division of the California Institute of Technology, Pasadena, for the NASA Science Mission Directorate, Washington. Lockheed Martin Space Systems, Denver, is the prime contractor for the project and built the spacecraft.