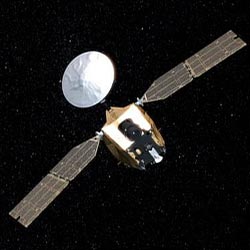 The first and largest of four trajectory correction maneuvers scheduled before the orbiter reaches Mars is planned for Aug. 27.

For the calibration task on Aug. 15, the spacecraft slewed about 15 degrees to scan the camera across the positions of the Earth and Moon, then returned to the attitude it will hold for most of the cruise. Data were properly recorded onboard, downlinked to Earth and received by the Mars Color Imager team at Malin Space Science Systems, San Diego. Dr. Michael Malin of Malin Space Science Systems, principal investigator for Mars Color Imager, said the image data are being processed and analyzed.

This multiple-waveband camera is the widest-angle instrument of four cameras on the orbiter, designed for imaging all of Mars daily from an altitude of about 300 kilometers (186 miles). Imaged at a range of more than 1 million kilometers (620,000 miles) away, the crescent Earth and Moon fill only a few pixels and are not resolved in the image. However, this is enough useful information to characterize the instrument's response in its seven color bands, including two ultraviolet channels that will be used to trace ozone in the Mars atmosphere.? This is the first of two events early in the cruise phase that check instrument calibrations after launching. The second will occur in early September when higher resolution cameras are pointed at Earth and the Moon as the spacecraft continues its flight to Mars.

The Mars Reconnaissance Orbiter will reach Mars and enter orbit on about March 10, 2006. After gradually adjusting the shape of its orbit for half a year, it will begin its primary science phase in November 2006. The mission will examine Mars in unprecedented detail from low orbit, returning several times more data than all previous Mars missions combined. Scientists will use its instruments to gain a better understanding of the history and current distribution of Mars' water. By inspecting possible landing sites and by providing a high-data-rate relay, it will also support future missions that land on Mars.

More information about the mission is available online at http://www.nasa.gov/mro .

The Mars Reconnaissance Orbiter mission is managed by JPL, a division of the California Institute of Technology, Pasadena, for the NASA Science Mission Directorate. Lockheed Martin Space Systems, Denver, prime contractor for the project, built both the spacecraft and the launch vehicle.