Peeling Back Layers of a Martian Polar Ice Cap 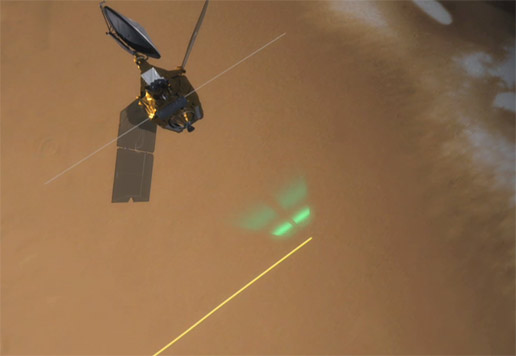 This artist's animation illustrates how NASA's Mars Reconnaissance Orbiter used radar to map the insides of the north polar ice cap on Mars.

The animation begins by showing the orbiter flying above the Red Planet. It then shows the orbiter shooting out beams of radio waves across a slice of the ice cap. The waves, which belong to the radio portion of the electromagnetic spectrum, penetrate through the ice and bounce back at different times depending on the differing concentrations of sand and dust in the ice.

The result is a glimpse inside the layers that make up the ice cap, as demonstrated by the next part of the movie. The ice cap slices open to reveal what the scientists found. Flashing green lights show some of the actual radar reflections, subsequently seen as dark lines delineating the layers. While the uppermost thin layers were observed before in camera images, the deeper layers have been discovered by the Mars Reconnaissance Orbiter. The movie ends by showing the radar image by itself.

These observations demonstrate that radar can be used to study the history of global climate on Mars by revealing the patterns of deep layering. They also expose a flat boundary between the ice cap and the surface of Mars, indicating that the outer strong shell of Mars must be thick enough to support the weight of the ice cap without sagging. This, in turn, suggests that the planet's outer shell, called the lithosphere, is colder than previously thought, with temperatures in the interior increasing gradually with depth. Any bodies of liquid water that might exist underneath Martian ground must therefore be deeper than previously calculated, where temperatures are warmer.

This artist's animation is based on data from the Shallow Radar instrument on Mars Reconnaissance Orbiter, as well as images from NASA's Mars Global Surveyor mission.

The Shallow Radar instrument was provided by the Italian Space Agency. Its operations are led by the University of Rome and its data are analyzed by a joint U.S.-Italian science team. JPL, a division of the California Institute of Technology, Pasadena, manages the Mars Reconnaissance Orbiter for the NASA Science Mission Directorate, Washington.