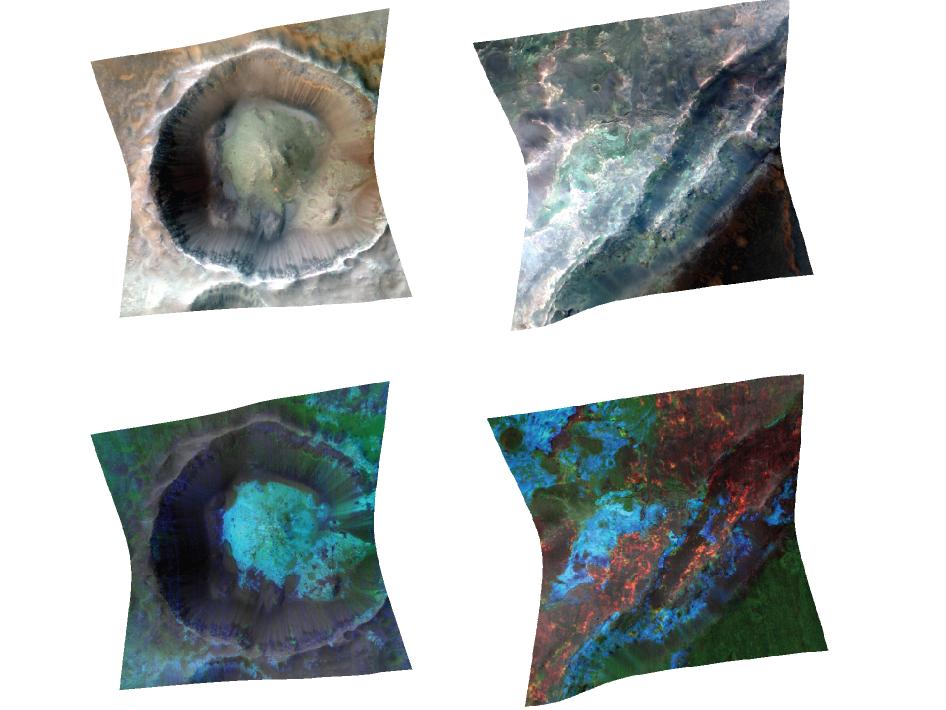 Clay Minerals in Craters and Escarpments on Mars

Impact cratering and erosion combine to reveal the composition of the Martian underground by exposing materials from the subsurface. Investigation of exposed clay minerals at thousands of Martian sites by the Compact Reconnaissance Imaging Spectrometer for Mars (CRISM) on NASA's Mars Reconnaissance Orbiter suggests a long period of wet, warm conditions, mostly underground.

Infrared light indicates terrains of different composition in false-color infrared images (top) of a crater (left) and an escarpment (right). Each of the scenes is about 6 miles (10 kilometers) wide. The lower images of the same sites show how distinctive absorption bands permit identification and mapping of specific minerals. In the lower images, iron-magnesium clays are mapped in blue. These are the most common clays on Mars, occupying large sections of the deep crust and mostly formed by subsurface water. These clays are beneath unaltered volcanic layers that contain the mineral olivine (green). The site shown in the image on the right also contains aluminum clays (red), which formed by waters near the surface. These clays are uncommon on Mars but are sometimes located on top of iron-magnesium clays in a distinctive stratigraphy, indicating formation later in time.

NASA's Jet Propulsion Laboratory, a division of the California Institute of Technology, Pasadena, manages the Mars Reconnaissance Orbiter for the NASA Science Mission Directorate, Washington. Lockheed Martin Space Systems, Denver, built the spacecraft. The Johns Hopkins University Applied Physics Laboratory led the effort to build the CRISM instrument and operates CRISM in coordination with an international team of researchers from universities, government and the private sector.