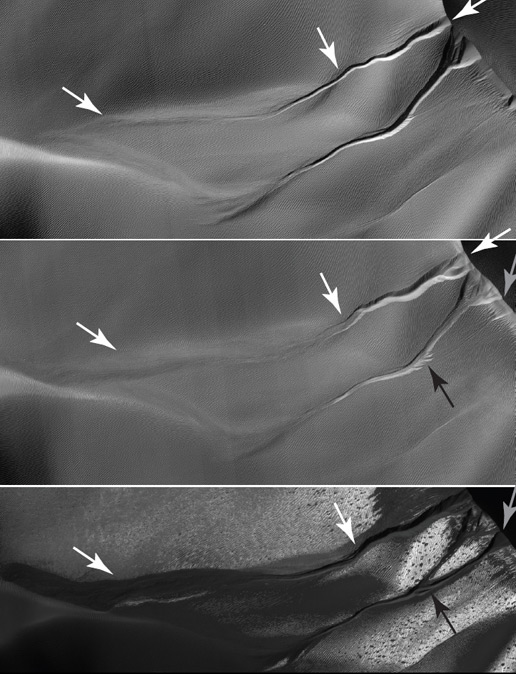 The gullies on a Martian sand dune in this trio of images from NASA's Mars Reconnaissance Orbiter deceptively resemble features on Earth that are carved by streams of water. However, these gullies likely owe their existence to entirely different geological processes apparently related to the winter buildup of carbon-dioxide frost.

Scientists at the University of Arizona, Tucson, and at Johns Hopkins University Applied Physics Laboratory, Laurel, Md., compared pairs of images from before and after changes in such dune gullies. They determined that the changes occur in Martian winter, during periods of carbon-dioxide frost, rather than during warmer seasons when frozen water, if present, might somehow melt and flow.

Each of the three images here shows an area about 1.2 kilometers (three-fourths of a mile) across. The dunes lie inside Matara Crater, at 49.4 degrees south latitude, 34.7 degrees east longitude. The images are portions of observations by the High Resolution Imaging Science Experiment (HiRISE) camera on the Mars Reconnaissance Orbiter. HiRISE took the top one on March 14, 2008, which was mid-autumn in Mars' southern hemisphere, the middle one on July 9, 2009, in the first half of the next southern-Mars summer, and the bottom one on October 4, 2010, in the late part of the following (and most recent) winter season.

Illumination is from the upper left. Gullies run leftward downhill from a dune crest in the upper right corner.

Arrows indicate places where changes appeared between observations. Each year, the alcoves at the dune's crest and the channel beds widened during the Martian winter as material moved down slope and lengthened the apron at the bottom. Very new deposits (formed sometime in September 2010) are visible in the bottom image as the darker material extending from the channels and obscuring the pre-existing ripples on the dune's surface. Additionally, on the upper gully, material first filled-in part of the channel (between 2008 and 2009) and then re-incised the channel into the apron (between 2009 and 2010).