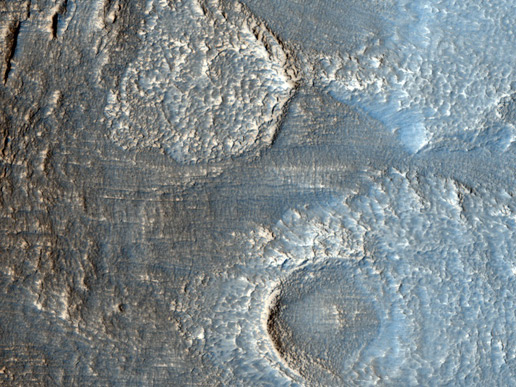 The terrain in this image lies in the Deuteronilus Mensae region along the highland-lowland dichotomy boundary in the northern hemisphere of Mars.

The High Resolution Imaging Science Experiment (HiRISE) camera on NASA's Mars Reconnaissance Orbiter recorded this image on March 9, 2010. The target for this HiRISE observation was a suggestion submitted through the camera team's HiWish public-suggestion program. For more information about how to submit target suggestions, see http://uahirise.org/hiwish/.

This region contains many mesas surrounded by lobate debris aprons that are thought to be ice-rich. These aprons have been interpreted as a variety of possible features including rock glaciers, ice-rich mass movements, or debris-covered glacial flows. Recent radar data from the Shallow Radar instrument on the Mars Reconnaissance Orbiter has shown them to be composed of nearly pure ice. This image shows an area at the edge of one of these mesas with a lobate debris apron extending from its base. Both the mesa top and the surface of the debris apron appear covered with ice-rich mantling materials characteristic of the Martian mid-latitudes and thought to have been deposited around 10 million years ago during a period of high obliquity.

This image covers a swath of ground about 1 kilometer (about two-thirds of a mile) wide. It is a portion of HiRISE observation ESP_016959_2240, which is centered at 43.62 degrees north latitude, 28.62 degrees east longitude. The season on Mars is northern-hemisphere spring. Other image products from this observation are available at http://hirise.lpl.arizona.edu/ESP_016959_2240.

Color images from HiRISE combine information from detectors with three different color filters: red, infrared, and blue-green. Thus they include information from part of the spectrum human eyes cannot see and are not true color as the eye would see. The resulting false color helps to show differences among surface materials.