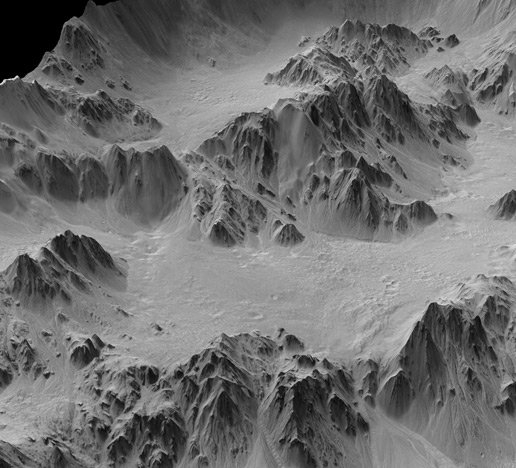 A digital terrain model generated from a stereo pair of images provides this synthesized, oblique view of a portion of the wall terraces of Mojave Crater in the Xanthe Terra region of Mars. This view (above), in which the vertical dimension is exaggerated three-fold compared with horizontal dimensions, shows the ponding of material backed up behind massive wall-terrace blocks of bedrock. Hundreds of impact craters on Mars have similarly ponded features with pitted surfaces. These "pitted ponds" are thought to result when material melted by the crater-causing impacts is captured behind the wall terraces.

Mojave Crater is approximately 60 kilometers (37 miles) in diameter, centered at 327.0 degrees east latitude, 7.5 degrees north latitude. The portion of its northwestern edge shown here spans about 3.5 kilometers (about 2.5 miles) in width halfway between the bottom and top of the image. The above view is toward the north.

Mojave is one of the freshest large craters on Mars. A survey of its features indicates very few overprinting craters on them, and an analysis of that infrequency suggests the crater may be as young as about 10 million years, very young for a crater of this size. The depth of the crater -- about 2.6 kilometers (1.6 miles) -- also demonstrates that Mojave has experienced little infilling or erosion.

Mojave gives us a glimpse of what a very large complex crater looks like on Mars. In a sense, it is a "Rosetta Stone" of craters, given that it's so fresh and most others - especially this size - have been affected by erosion, sedimentary infilling and overprinting by other geologic processes. Such fresh craters give insight into the impact process: ejecta, melt-generation, deposition, etc.

Mojave's fans and channels, as seen in the main image and Figure 1 are most intriguing. They hint that impacts such as Mojave's may have unleashed water or water-ice from the subsurface to flow across the surface and, perhaps, condense as rain or snow for a brief period of Martian time. This further suggests that early climate on Mars could have been heavily influenced by the intense bombardment about 3.9 billion years ago when impacts creating craters Mojave's size and far larger were more common.

The digital terrain model yielding this view combines data from a pair of images taken by the High Resolution Imaging Science Experiment (HiRISE) camera on NASA's Mars Reconnaissance Orbiter. The model provides detailed topographical information for for an area covering portions of the crater's northwestern wall terraces, rim and ejecta blanket. Such digital terrain models are superior to standard stereo images viewed with blue-red glasses, which show only relative changes in elevation instead of absolute numerical data. Digital terrain models can be used for rendering perspective views from any angle or even fly-by movies. More importantly, they can be used for detailed quantitative analysis, such as profiles, slopes, morphometry, numeric modeling, etc.

Figures 2 and 3 show the whole area included in this model -- about 5 kilometers (3 miles) wide and four times that in length. Figure 2 is viewed from the southeast and highlights the the crater interior. Figure 3 is viewed from the northwest and highlights the crater rim and ejecta blanket. The HiRISE observations used for generating this digital terrain model are PSP_001481_1875, taken on Nov. 19, 2006, and PSP_002167_1880, taken on Jan. 12, 2007. Figure 4 shows how the imaged area fits into a larger view of Mojave Crater. Other image products from these HiRISE observations are available at http://hirise.lpl.arizona.edu/PSP_001481_1875, http://hirise.lpl.arizona.edu/PSP_002167_1880 and a digital terrain model page at http://www.uahirise.org/dtm/dtm.php?ID=PSP_001481_1875.