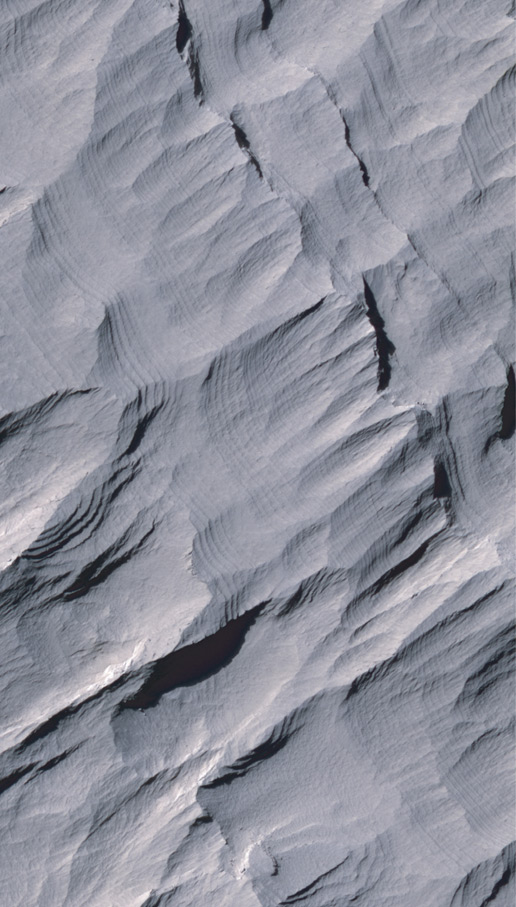 Layers of rock in the upper portion of a tall mound near the center of Gale Crater on Mars exhibit a regular thickness of several meters, unlike the less regular pattern of layers in the lower formation on the same mound. The mound of layered rocks is over 4 kilometers (2.4 miles) high, making it more than twice as thick as the stack of rocks exposed in the Grand Canyon on Earth. Gale Crater is approximately 152 kilometers (94 miles) in diameter.

This view of layering in the mound's upper formation covers an area about 550 meters (1,800 feet) wide. It was taken by the High Resolution Imaging Science Experiment (HiRISE) camera on NASA's Mars Reconnaissance Orbiter on Sept. 8, 2008.

Sulfate and clay minerals that have been observed in the lower formation have not been detected in the upper formation, where bedrock may be covered with dust. Previous studies have suggested that regularly spaced layers such as those in the upper formation might record rhythmic climate cycles linked to changes in the planet's orbit and tilt, or other periodic changes in the environment affecting deposition of sediments.

This image is one product from HiRISE observation PSP_009927_1750, centered at 4.9 degrees south latitude, 137.7 degrees east longitude. Other image products from this observation are available at http://hirise.lpl.arizona.edu/PSP_009927_1750.