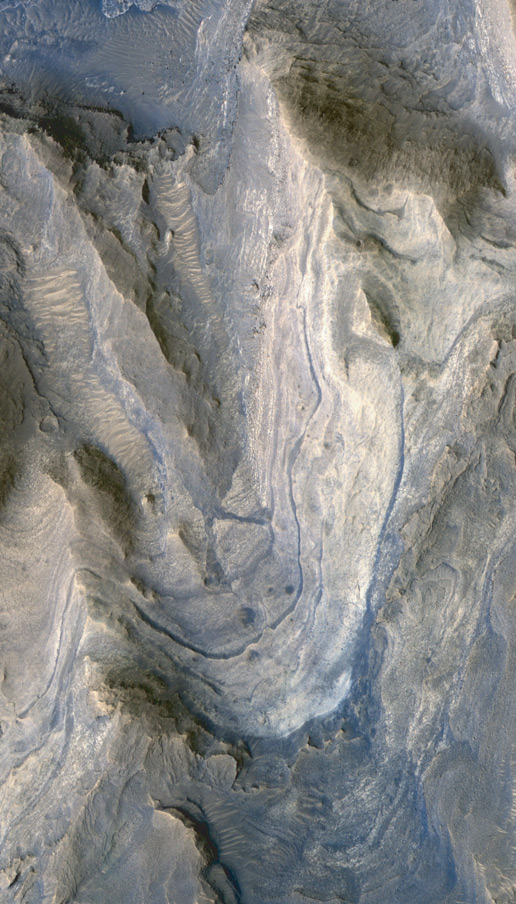 Layers of rock exposed in the lower portion of a tall mound near the center of Gale Crater on Mars exhibit variations in layer thickness and range between dark and light tones. The crater's mound of layered material is over 4 kilometers (2.4 miles) high, making it more than twice as thick as the stack of rocks exposed in the Grand Canyon on Earth. Gale Crater is approximately 152 kilometers (94 miles) in diameter.

This view of layering in the mound's lower formation covers an area about 950 meters (3,100 feet) wide. It was taken by the High Resolution Imaging Science Experiment (HiRISE) camera on NASA's Mars Reconnaissance Orbiter on April 23, 2009.

Observations of the lower formation by the Compact Reconnaissance Imaging Spectrometer for Mars, on the same orbiter, have indicated the presence of sulfate salts and clay minerals in these rock layers. The changes in composition from the lower (older) to the upper (younger) layers in the Gale Crater mound may record stages in water loss and the drying out of Mars.

This image is one product from HiRISE observation ESP_012841_1750, centered at 4.9 degrees south latitude, 137.2 degrees east longitude. Other image products from this observation are available at http://hirise.lpl.arizona.edu/ESP_012841_1750.