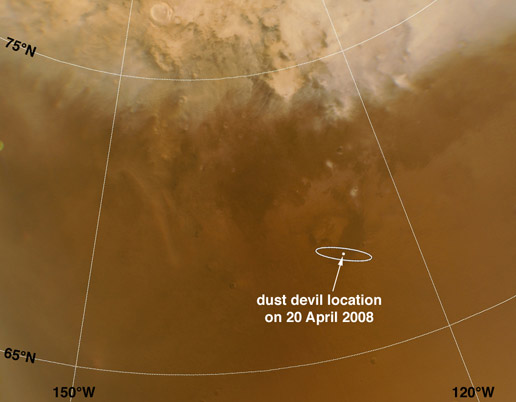 NASA's Phoenix Mars Lander is scheduled to land on the Martian northern plains near 68 degrees north latitude, 127 degrees west longitude on May 25, 2008. In preparation for the landing, NASA's Mars Reconnaissance Orbiter has been monitoring weather in the region around the landing site. On April 20, 2008, the orbiter's Mars Color Imager camera captured this view of a large region of northern Mars that includes the landing target area in the lower right quadrant.

An annotated version of the image indicates the location of the landing ellipse, about 100 kilometers (60 miles) long. The Context Camera on the Mars Reconnaissance Orbiter took an image of the landing area at the same time the Mars Color Imager took this image. A dot within the landing ellipse marks the location of two active dust devils visible in the Context Camera image, PIA10633. When the Mars Color Imager acquired this image, the season in Mars' northern hemisphere was late spring. A few weeks earlier, the Phoenix landing site was still covered with seasonal frost left over from the previous winter.