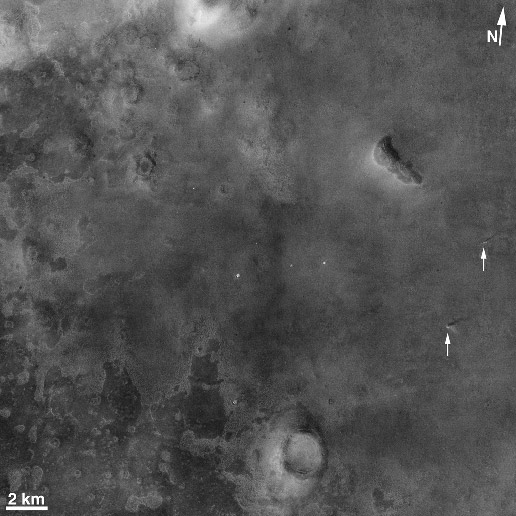 NASA's Phoenix Mars Lander is scheduled to land on the Martian northern plains near 68 degrees north latitude, 127 degrees west longitude on May 25, 2008. In preparation for the landing, NASA's Mars Reconnaissance Orbiter has been monitoring weather in the region around the landing site. On April 20, 2008, the orbiter's Context Camera captured this view showing two active dust devils within the Phoenix landing ellipse.

This is a subframe covering an area about 26 kilometers (16 miles) on each side, part of a larger image posted at PIA10632. It shows two dust devils and their shadows. Based on measurement of the shadows cast by the dust devils, one of the vortices towered about 590 meters (about 1,930 feet) with a dust plume extending 920 meters (about 3,020 feet) above the surface. The other reached about 390 meters (1,280 feet) high, with a dust plume extending to 790 meters (2,590 feet). The resolution here is 6 meters (19.7 feet) per pixel.

When the Context Camera acquired this image, the season in Mars' northern hemisphere was late spring. A few weeks earlier, the Phoenix landing site was still covered with seasonal frost left over from the previous winter. White patches in small craters near the center of the picture are areas where the winter frost remained, even as late as April 20.

As spring gives way to summer, dust devils are likely to occur more frequently, as local temperatures rise. These two dust devils observed in late April are among the first of the season. The cameras on the Phoenix lander might be able to spot additional dust devils after the spacecraft arrives, as the Mars Exploration Rover Spirit has been able to do at its southern hemisphere landing site.

Dust devils are whirling vortices that have picked up dust from the ground. Such vortices can occur even when no dust is present, but then they are not visible to the cameras onboard the Mars Reconnaissance Orbiter. Such vortices commonly form as hot air rises from the surface on an otherwise generally calm day with little or no breeze. Dust devils will travel across the surface on the gentle breezes that do occur. Sometimes, dust devils have been observed by cameras orbiting Mars to create streaks on the ground as they disrupt and pick up dust, though no streaks are observed in this image.

The Mars Orbiter Camera onboard NASA's Mars Global Surveyor orbiter observed dust devils -- and streaks created by them -- throughout its 1997 to 2006 mission. During that time, scientists at Malin Space Science Systems observed more than 12,000 active dust devils. They were seen over the full range of elevations and nearly all latitudes on Mars. Dust devil streaks were found in Mars Orbiter Camera images as far north as the edge of the north polar residual cap and the dune fields that surround the region. However, the northernmost active dust devil captured by that camera was at 62.2 degrees north latitude, which is further south than the Phoenix site. Another camera on the Mars Reconnaissance Orbiter, the Mars Color Imager, captured a simultaneous, wider-field, color view of the area included in this Context Camera image. That view can be seen at PIA10634.