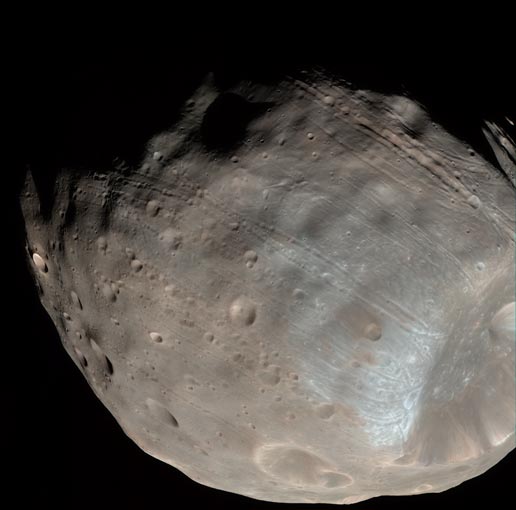 The High Resolution Imaging Science Experiment (HiRISE) camera on NASA's Mars Reconnaissance Orbiter took two images of the larger of Mars' two moons, Phobos, within 10 minutes of each other on March 23, 2008. This is the second, taken from a distance of about 5,800 kilometers (about 3,600 miles). It is presented in color by combining data from the camera's blue-green, red, and near-infrared channels.

The color data accentuate details not apparent in black-and-white images. For example, materials near the rim of Stickney appear bluer than the rest of Phobos. Based on analogy with materials on our own moon, this could mean this surface is fresher, and therefore younger, than other parts of Phobos.

A series of troughs and crater chains is obvious on other parts of the moon. Although many appear radial to Stickney in this image, recent studies from the European Space Agency's Mars Express orbiter indicate that they are not related to Stickney. Instead, they may have formed when material ejected from impacts on Mars later collided with Phobos. The lineated textures on the walls of Stickney and other large craters are landslides formed from materials falling into the crater interiors in the weak Phobos gravity (less than one one-thousandth of the gravity on Earth).

In the full-resolution version of this image, a pixel encompasses 5.8 meters (19 feet), providing a resolution (smallest visible feature) of about 15 meters (about 50 feet). Previous pictures from NASA's Mars Global Surveyor are of slightly higher resolution, at 4 meters (13 feet) per pixel. However, the HiRISE images have higher signal-to-noise, making the new data some of the best ever for Phobos. This image is in the HiRISE catalog as PSP_007769_9015.