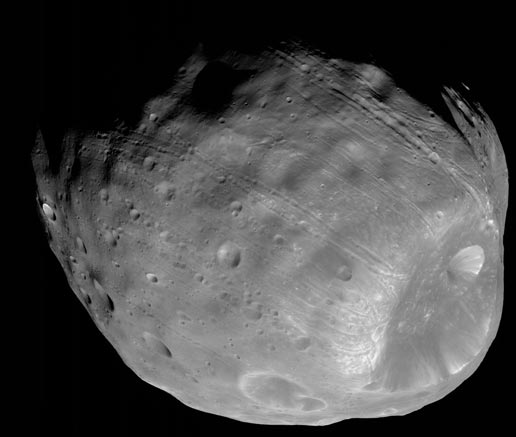 The High Resolution Imaging Science Experiment (HiRISE) camera on NASA's Mars Reconnaissance Orbiter took two images of the larger of Mars' two moons, Phobos, within 10 minutes of each other on March 23, 2008. This is the second, taken from a distance of about 5,800 kilometers (about 3,600 miles). The illuminated part of Phobos seen in the images is about 21 kilometers (13 miles) across.

The most prominent feature in the images is the large crater Stickney in the lower right. With a diameter of 9 kilometers (5.6 miles), it is the largest feature on Phobos. A series of troughs and crater chains is obvious on other parts of the moon. Although many appear radial to Stickney in this image, recent studies from the European Space Agency's Mars Express orbiter indicate that they are not related to Stickney. Instead, they may have formed when material ejected from impacts on Mars later collided with Phobos. The lineated textures on the walls of Stickney and other large craters are landslides formed from materials falling into the crater interiors in the weak Phobos gravity (less than one one-thousandth of the gravity on Earth).

In the full-resolution version of this image, a pixel encompasses 5.8 meters (19 feet), providing a resolution (smallest visible feature) of about 15 meters (about 50 feet). Previous pictures from NASA's Mars Global Surveyor are of slightly higher resolution, at 4 meters (13 feet) per pixel. However, the HiRISE images have higher signal-to-noise, making the new data some of the best ever for Phobos.

Although the image is displayed here in black and white, data from HiRISE's three color channels were used to give higher signal-to-noise, thereby increasing detail. The image is in the HiRISE catalog as PSP_007769_9015.

NASA's Jet Propulsion Laboratory, a division of the California Institute of Technology in Pasadena, manages the Mars Reconnaissance Orbiter for NASA's Science Mission Directorate, Washington. Lockheed Martin Space Systems, Denver, is the prime contractor for the project and built the spacecraft. The High Resolution Imaging Science Experiment is operated by the University of Arizona, Tucson, and the instrument was built by Ball Aerospace & Technologies Corp., Boulder, Colo. Image Credit: NASA/JPL-Caltech/University of Arizona