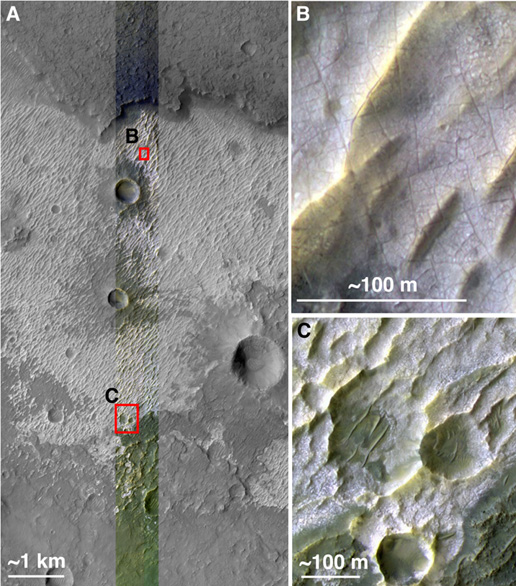 This image provides higher-resolution views of a site where another observation PIA10247 indicates the presence of chloride salt deposits. The High Resolution Imaging Science Experiment (HiRISE) camera on NASA's Mars Reconnaissance Orbiter took this image on March 30, 2007. The colors resemble natural appearance, but are not true color. The chloride mineral deposit looks bright in tone, like salt pans on Earth. The deposit seems to be emerging as overlying material erodes away.

Evidence that this site and about 200 other sites in the southern highlands of Mars bear deposits of chloride salts comes from observations by the Thermal Emission Imaging System on NASA's Mars Odyssey orbiter. The salt deposits typically lie within topographic depressions, as exemplified in this image. They point to places where water was once abundant, then evaporated, leaving the minerals behind.

The site lies at about 221 degrees east longitude and 38.8 degrees south latitude, within the rugged Terra Sirenum region of Mars. This view, taken during southern-hemisphere spring on Mars, is part of a full HiRISE image at posted at http://hirise.lpl.arizona.edu/.