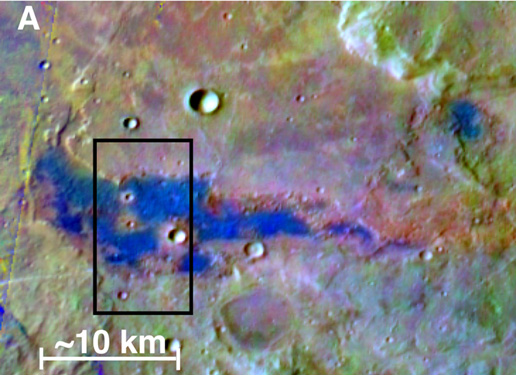 Bright blue marks a deposit of chloride (salt) minerals in the southern highlands of Mars in this false-color image, which highlights mineral composition differences. The Thermal Emission Imaging System (THEMIS) camera on NASA's Mars Odyssey orbiter made this observation. Researchers using THEMIS reported in March 2008 that they have found about 200 such deposits of chloride salts. Observations by THEMIS and other instruments orbiting Mars indicate that these deposits typically lie within topographic depressions. The salt deposits suggest that Mars was much wetter long ago. They point to places where water was once abundant, then evaporated, leaving the minerals behind.

The scale bar is about 10 kilometers (6.2 miles). The black rectangle indicates the outline of a higher resolution view, available as PIA10248.