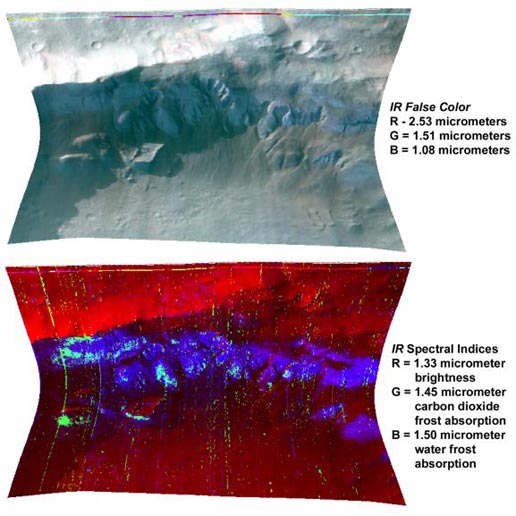 The image shown here covers part of a crater rim, which is illuminated from the upper left. North is at the top. The topography creates a cold microenvironment on the south side of the rim that is partially protected from solar illumination. That cold surface contains an outlier of the southern seasonal frost about 15 degrees of latitude closer to the equator than the average edge of the frost at this season.

The top image was constructed from three infrared wavelengths that highlight the bluer color of frost than the background rock and soil. Note that the frost occurs both on sunlit and shaded surfaces on the south side of the rim. The shaded areas are still visible because they are illuminated indirectly by the Martian sky.

The bottom image was constructed by measuring the depths of spectral absorption bands due to water frost and carbon dioxide frost, and displaying the results in image form. Blue shows strength of an absorption due to water frost near 1.50 micrometers, and green shows strength of an absorption due to carbon dioxide frost near 1.45 micrometers. Red shows brightness of the surface at 1.33 micrometers -- outside of the frost absorption bands -- in order to show the relationship of frost to the illuminated crater rim.

In comparing the top and bottom images, note that water frost occurs in many locations on the south-facing side of the crater rim, both in sunlit and shaded areas. Because it faces away from the sun, this side of the crater rim is colder than the north, sun-facing side. This favors the formation of frost. In contrast, carbon dioxide frost occurs only in the coldest, most shaded areas.