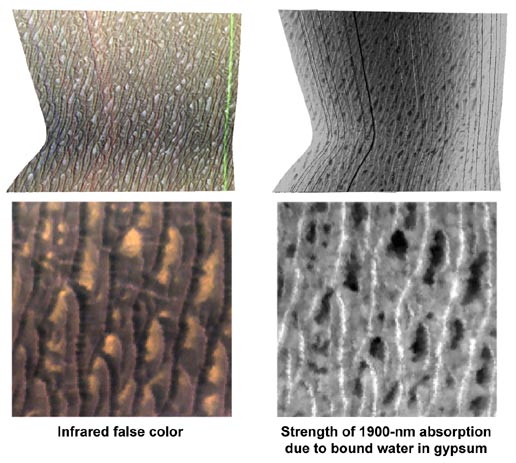 This Compact Reconnaissance Imaging Spectrometer for Mars (CRISM) "targeted image" shows a region of sand dunes surrounding the Martian north polar cap. CRISM, an instrument on NASA's Mars Reconnaissance Orbiter, acquired the image at 1811 UTC (2:11 p.m. EDT) on Oct. 1, 2006. The imaged site is near 80.0 degrees north latitude, 240.7 degrees east longitude. It covers an area about 12 kilometers (7.5 miles) square. At the center of the image, the spatial resolution is as good as 20 meters (65 feet) per pixel. The image was taken in 544 colors covering 0.36 to 3.92 micrometers.

CRISM's sister instrument on the Mars Express spacecraft, OMEGA, has spectrally mapped Mars at lower spatial resolution and discovered that several regions of the planet are rich in sulfate minerals formed by liquid water. Surprisingly, one of the sulfate-rich deposits is a part of the giant field of sand dunes surrounding the north polar cap. CRISM is remapping the dune field at about five times higher resolution than OMEGA, and imaging selected regions at 50 times higher resolution. This image is the first of the high-resolution images of the dune field.

This visualization includes two renderings of the data, both map-projected. The left images are false-color representations showing brightness of the surface at selected infrared wavelengths. The right images show strength of an absorption band at 1900 nanometers wavelength, which indicates the relative abundance of the sulfate mineral gypsum. Brighter areas have more gypsum, and darker areas have less gypsum. The bottom views are enlargements of the central part of the two versions of the image shown at top.

Gypsum is a light-colored, whitish mineral, so it was anticipated that gypsum-rich parts of the sand dunes would be light in color. In fact, there are light-colored areas in the left images, but the images of the gypsum absorption at right show that the light areas have only low gypsum abundance. The dark sand dunes contain most of the gypsum, which is particularly concentrated at the dune crests. CRISM's scientists are taking more high-resolution images of the dune fields to see if this pattern is prevalent, and to attempt to track down the source of the gypsum that makes an arid dune field so rich in minerals formed long ago in liquid water.

The Compact Reconnaissance Imaging Spectrometer for Mars (CRISM) is one of six science instruments on NASAís Mars Reconnaissance Orbiter. Led by The Johns Hopkins University Applied Physics Laboratory, the CRISM team includes expertise from universities, government agencies and small businesses in the United States and abroad.