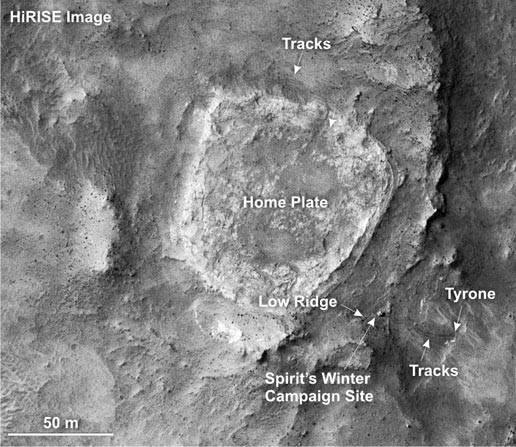 This portion of an image acquired by the Mars Reconnaissance Orbiter's High Resolution Imaging Science Experiment camera shows the Spirit rover's winter campaign site. The rover is visible. So is the "Low Ridge" feature where Spirit was parked with an 11-degree northerly tilt to maximize sunlight on the solar panels during the southern winter season. Tracks made by Spirit on the way to "Home Plate" and to and from "Tyrone," an area of light-toned soils exposed by rover wheel motions, are also evident. The original image is catalogued as PSP_001513_1655_red and was taken Sept. 29, 2006.