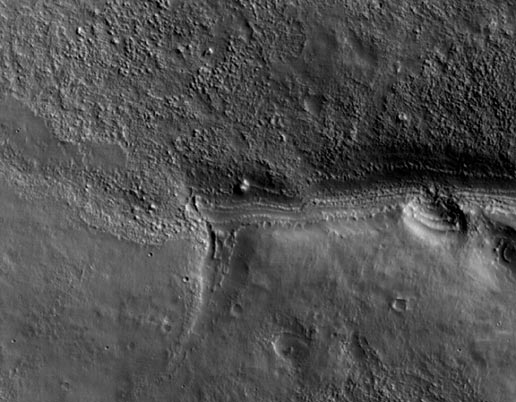 This view shows a full-resolution portion of the first image of Mars taken by the High Resolution Imaging Science Experiment camera (HiRISE) on NASA's Mars Reconnaissance Orbiter. The spacecraft, launched Aug. 12, 2005, began orbiting Mars on March 10, 2006. The image is of an area in Mars' mid-latitude southern highlands.

HiRISE took this first test image from orbit on March 24, 2006, from an altitude of 2,489 kilometers (1,547 miles), achieving a resolution of 2.49 meters (98 inches) per pixel, or picture element. The smallest objects of discernable shape are about three pixels across. An image acquired at this latitude during the Mars Reconnaissance Orbiter's main science phase, beginning in fall 2006, would be taken from an altitude of about 280 kilometers (174 miles) and have a resolution of 28 centimeters (11 inches) per pixel.

The quality of this test image is spectacular, with no hint to the eye of any smear or blurring. A high signal-to-noise ratio reveals fine details even in the shadows.