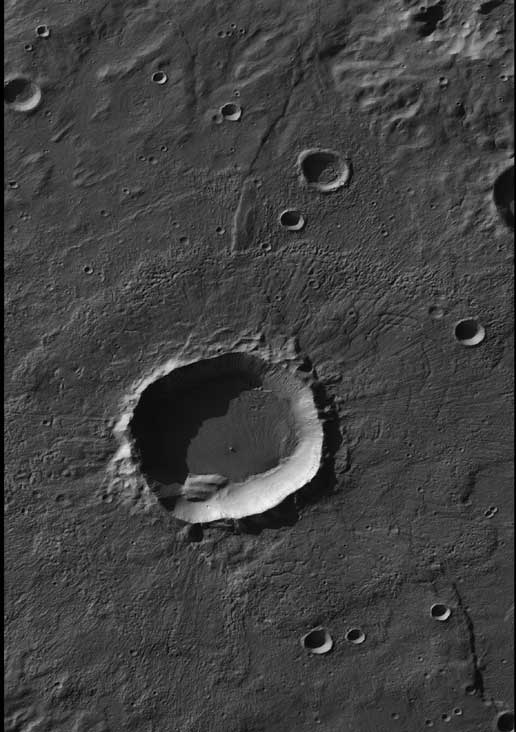 The largest number of gullies on Mars occur on the walls of southern hemisphere craters. During southern winter, many of the gullied walls are in shadow. It has been known for many years from images taken by the Mars Orbiter Camera on NASA's Mars Global Surveyor that frost forms on these shadowed slopes and that differences in the amount or nature of the frost deposits highlight the gully floors and deposits. Such differences may occur because the materials are of different particle sizes or have other differing attributes that affect their thermophysical properties. To investigate this phenomena, the Context Camera on NASA's Mars Reconnaissance Orbiter acquired this image of a crater at 39.3 degrees south, 136.5 degrees west, where gullies were known to display frost during winter. To see the gullies, download the image and view it in an image processing program, as they are nearly invisible in the normal contrast image. The team using Mars Reconnaissance Orbiter's High Resolution Imaging Science Experiment camera elected to "ride along" with the Context Camera observation, and that camera's spectacular color view of the frosted gullies can be seen at http://mars.jpl.nasa.gov/mro/ . Image credit: NASA/JPL/MSSS