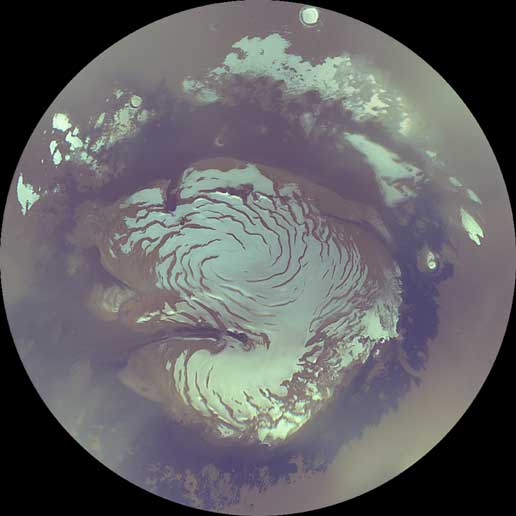 During the last week of September and the first week or so of October 2006, scientific instruments on NASA's Mars Reconnaissance Orbiter were turned on to acquire test information during the transition phase leading up to full science operations. The mission's primary science phase will begin the first week of November 2006, following superior conjuction. (Superior conjunction is where a planet goes behind the sun as viewed from Earth.) Since it is very difficult to communicate with a spacecraft when it is close to the sun as seen from Earth, this checkout of the instruments was crucial to being ready for the primary science phase of the mission.

Throughout the transition-phase testing, the Mars Color Imager (MARCI) acquired terminator (transition between nighttime and daytime) to terminator swaths of color images on every dayside orbit, as the spacecraft moved northward in its orbit. The south polar region was deep in winter shadow, but the north polar region was illuminated the entire Martian day. During the primary mission, such swaths will be assembled into global maps that portray the state of the Martian atmosphere -- its weather -- as seen every day and at every place at about 3 p.m. local solar time. After the transition phase completed, most of the instruments were turned off, but the Mars Climate Sounder and MARCI have been left on. Their data will be recorded and played back to Earth following the communications blackout associated with conjuction.

Combined with wide-angle image mosaics taken by the Mars Orbiter Camera on NASA's Mars Global Surveyor at 2 p.m. local solar time, the MARCI maps will be used to track motions of clouds.

This image is a composite mosaic of four polar views of Mars, taken at midnight, 6 a.m., noon, and 6 p.m. local Martian time. This is possible because during summer the sun is always shining in the polar region. It shows the mostly water-ice perennial cap (white area), sitting atop the north polar layered materials (light tan immediately adjacent to the ice), and the dark circumpolar dunes. This view shows the region poleward of about 72 degrees north latitude. The data were acquired at about 900 meters (about 3,000 feet) per pixel. Three channels are shown here, centered on wavelengths of 425 nanometers, 550 nanometers and 600 nanometers. Image credit: NASA/JPL/MSSS