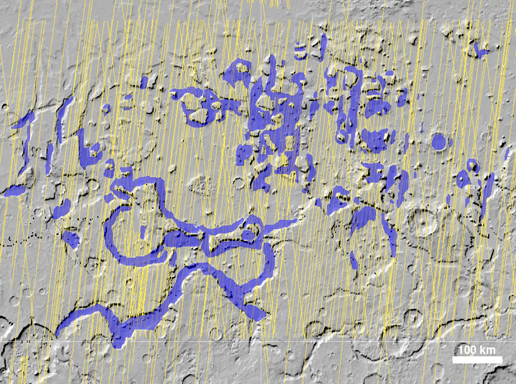 A radar on NASA's Mars Reconnaissance Orbiter has detected widespread deposits of glacial ice in the mid-latitudes of Mars.

This map of a region known as Deuteronilus Mensae, in the northern hemisphere, shows locations of the detected ice deposits in blue. The yellow lines indicate ground tracks of the radar observations from multiple orbits of the spacecraft.

The ice, up to 1 kilometer (0.6 mile) thick, is found adjacent to steep cliffs and hillsides, where rocky debris from slopes covers and protects the ice from sublimation into the atmosphere.

The base map of this image is shaded relief topography obtained by the Mars Orbiter Laser Altimeter on NASA's Mars Global Surveyor. The image is centered at 42.2 degrees north latitude and 24.7 degrees east longitude. It covers an area 1050 kilometers by 775 kilometers (650 miles by 481 miles).

The Shallow Radar instrument on the Mars Reconnaissance Orbiter was provided by the Italian Space Agency. Its operations are led by the University of Rome and its data are analyzed by a joint U.S.-Italian science team. NASA's Jet Propulsion Laboratory, a division of the California Institute of Technology in Pasadena, manages the Mars Reconnaissance Orbiter for the NASA Science Mission Directorate, Washington. Lockheed Martin Space Systems, Denver, is the spacecraft development and integration contractor for the project and built the spacecraft.