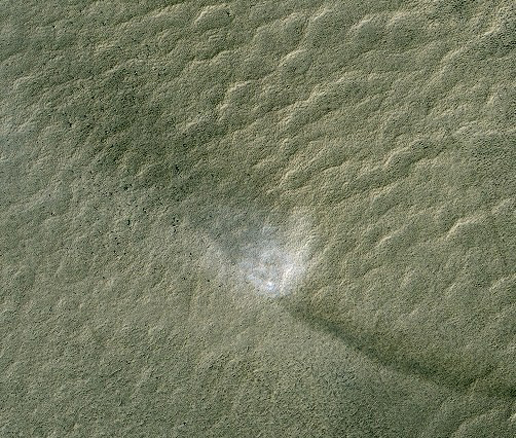 This telescopic view from orbit around Mars catches a Martian dust devil in action in the planet's southern hemisphere. The swirling vortex of dust can be seen near the center of the image. The shadow cast by this column of dust can be seen in the upper left while the dark track left by the passage of the dust devil is evident in the lower right.

This is a cutout from an image taken by the High Resolution Imaging Science Experiment (HiRISE) camera on NASA's Mars Reconnaissance Orbiter on June 15, 2009. The scene is at 68.6 degrees south latitude, 11.4 degrees east longitude.

Dust devils on Mars form the same way that they do on Earth. The ground heats up during the daytime, warming the air immediately above the surface. This hot layer of air rises and the cooler air above falls, creating vertical convection cells. A horizontal gust of wind causes the convection cells to rotate, resulting in a dust devil. As the dust devil moves across the surface of Mars it can pick up and disturb loose dust, leaving behind a track.