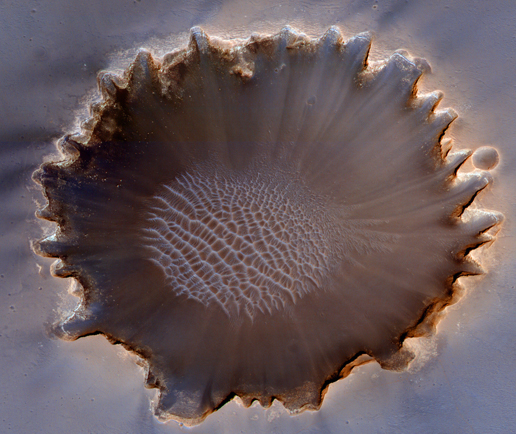 This image of Victoria Crater in the Meridiani Planum region of Mars was taken by the High Resolution Imaging Science Experiment (HiRISE) camera on NASA's Mars Reconnaissance Orbiter at more of a sideways angle than earlier orbital images of this crater. The camera pointing was 22 degrees east of straight down, yielding a view comparable to looking at the landscape out an airplane window. East is at the top. The most interesting exposures of geological strata are in the steep walls of the crater, difficult to see from straight overhead. Especially prominent in this oblique view is a bright band near the top of the crater wall. Colors have been enhanced to make subtle differences more visible.

Earlier HiRISE images of Victoria Crater supported the exploration of this crater by NASA's Opportunity roverand contributed to joint scientific studies. Opportunity explored the rim and interior of this 800-meter-wide (half-mile-wide) crater from September 2006 through August 2008. The rover's on-site investigations indicated that the bright band near the top of the crater wall was formed by diagenesis (chemical and physical changes in sediments after deposition). The bright band separates bedrock from the material displaced by the impact that dug the crater.

This view is a cutout from a HiRISE exposure taken on July 18, 2009. Some of Opportunity's tracks are still visible to the north of the crater (left side of this cutout).

Full-frame images from this HiRISE observation, catalogued as ESP_013954_1780, are at http://hirise.lpl.arizona.edu/ESP_013954_1780. The full-frame image is centered at 2.1 degrees south latitude, 354.5 degrees east longitude. It was taken at 2:31 p.m. local Mars time. The scence is illuminated from the west with the sun 49 degrees above the horizon.