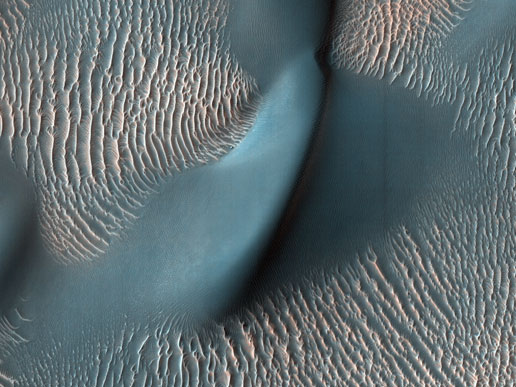 This view from the High Resolution Imaging Science Experiment (HiRISE) camera on NASA's Mars Reconnaissance Orbiter shows two classes of aeolian bedforms within Proctor Crater. The relatively bright, small ridges are ripples. From their study on Earth, and close-up examination by the MER rovers (roving elsewhere on Mars), we know that ripples are composed of fine sand (less than 200 microns in diameter) or fine sand coated with coarser sand and granules.

The larger, darker bedforms are dunes composed of sand, most likely of fine size. Ripples tend to move slower than dunes. Because of this, over time, ripples get covered with dust, possibly explaining the bright tone visible here. The dunes are dark probably because they are composed of basaltic sand (derived from dark, volcanic rock) that is blown by the wind enough that dust does not sufficiently accumulate to change their color.

This area in Proctor Crater, at 47.8 degrees south latitude and 30.7 degrees east longitude, is being monitored by HiRISE to document any changes over time.