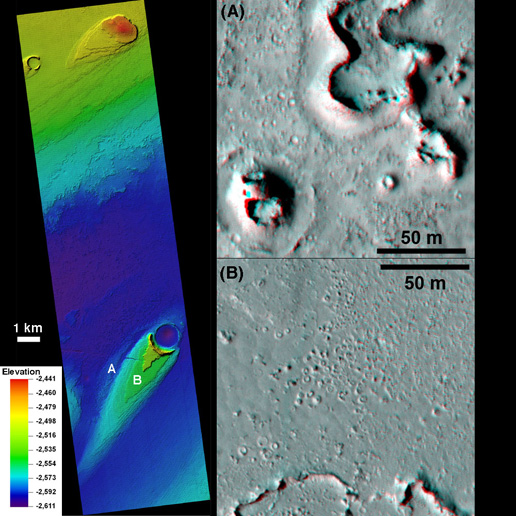 This combination of images helped researchers analyze the youngest flood lava on Mars, which is in Athabasca Valles, in the Elysium Planitia region of equatorial Mars.

On the left, color coding indicates relative elevation, based on three-dimensional modeling from stereo pairs of images taken by the High Resolution Imaging Science Experiment (HiRISE) camera on NASA's Mars Reconnaissance Orbiter. The scale bar is 1 kilometer (0.62 mile). The reference key to the color coding is in meters relative to a zero index altitude for Mars (negative numbers, so lower elevations than the zero index). The range from highest (red) to lowest (dark blue) is about 170 meters (558 feet). The labels "A" and "B" indicate the locations of the two images on the right.

The images on the right are made from stereo-paired HiRISE observations and appear three dimensional when viewed through red-blue glasses. The features evident here are "phreatovolcanic cones" related to lava-water interactions. They can be used as indicators of where the lava flowed. The difference in elevation between "A" and "B" is more than 100 meters (328 feet), so the lava flow reached a peak depth of more than 100 meters in this area. It is also interesting that the cones are small where the lava was thin (B) and big where the lave was deeper (A). The scale bars are 50 meters (164 feet).