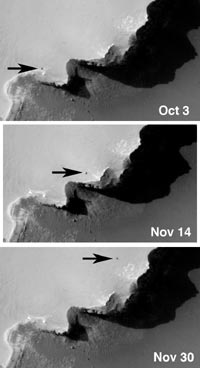 The High Resolution Imaging Science Experiment on NASA's Mars Reconnaissance Orbiter imaged Opportunity on Oct. 3, Nov. 4 and Nov. 30, 2006. Each time the rover was in a different location as it progressed around "victoria Crater." The remainder of the scene is unchanged, except that the shadows are slightly different given variations in the time of year and time of day between images. Also, each image was acquired with slightly different viewing geometries: the orbiter was pointed 3.84 degrees to the west for the first image, 16.3 degrees west for the second, and 1.76 degrees west for the third.

All three images are shown here in their original geometry, not reprojected to map format.

NASA's Jet Propulsion Laboratory, a division of the California Institute of Technology in Pasadena, manages the Mars Reconnaissance Orbiter for NASA's Science Mission Directorate, Washington. Lockheed Martin Space Systems is the prime contractor for the project and built the spacecraft. The High Resolution Imaging Science Experiment camera was built by Ball Aerospace Corporation and is operated by the University of Arizona.