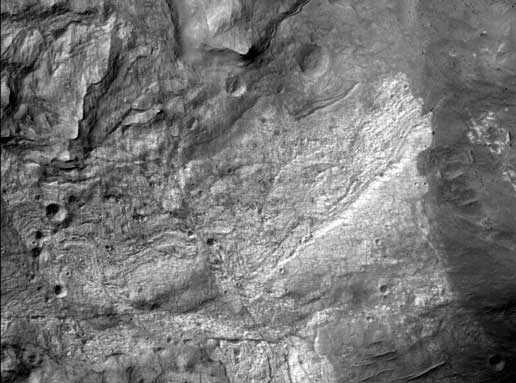 The high resolution camera on NASA's Mars Reconnaissance Orbiter captured its first image of Mars in the mapping orbit, demonstrating the full resolution capability, on Sept. 29, 2006. The High Resolution Imaging Science Experiment (HiRISE) acquired this image at 8:16 AM (Pacific Time), and parts of the image became available to the HiRISE team at 1:30 PM. With the spacecraft at an altitude of 280 kilometers (174 miles), the image scale is 29.7 centimeters per pixel (about 12 inches per pixel).

This sub-image covers a small portion of the floor of Ius Chasma, one branch of the giant Valles Marineris system of canyons. The image illustrates a variety of processes that have shaped the Martian surface. There are bedrock exposures of layered materials, which could be sedimentary rocks deposited in water or from the air. Some of the bedrock has been faulted and folded, perhaps the result of large-scale forces in the crust or from a giant landslide. The darker unit of material at right includes many rocks. The image resolves rocks as small as small as 90 centimeters (3 feet) in diameter. At bottom right are a few dunes or ridges of windblown sand. If a person was located on this part of Mars, he or she would just barely be visible in this image.

Image TRA_000823_1720 was taken by the High Resolution Imaging Science Experiment (HiRISE) camera onboard the Mars Reconnaissance Orbiter spacecraft on September 29, 2006. Shown here is a small portion of the full image. The full image is centered at minus 7.8 degrees latitude, 279.5 degrees East longitude. The image is oriented such that north is to the top. The range to the target site was 297 kilometers (185.6 miles). At this distance the image scale is 29.7 centimeters per pixel (with one-by-one binning) so objects about 89 centimeters (35 inches) across are resolved. The image was taken at a local Mars time of 3:30 PM and the scene is illuminated from the west with a solar incidence angle of 59.7 degrees, thus the sun was about 30.3 degrees above the horizon. At an LsubS of 113.6 degrees, the season on Mars is Northern Summer / Southern Winter.

NASA's Jet Propulsion Laboratory, a division of the California Institute of Technology in Pasadena, manages the Mars Reconnaissance Orbiter for NASA's Science Mission Directorate, Washington. Lockheed Martin Space Systems is the prime contractor for the project and built the spacecraft. The HiRISE camera was built by Ball Aerospace Corporation and is operated by the University of Arizona.