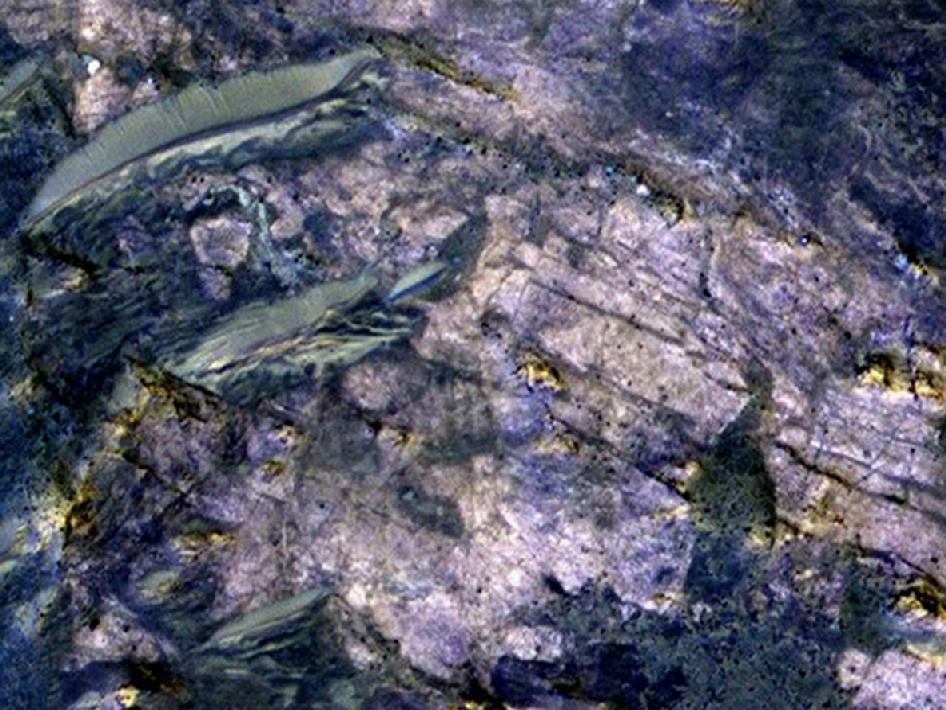 This image from orbit covers an area about 460 meters (about 1,500 feet) across, in which carbonate minerals have been identified from spectrometer observations. Fractures and possible layers are visible in the light-toned rock exposure containing the carbonates.

The location is inside an unnamed crater about 35 kilometers (22 miles) in diameter that is on the uplifted rim of Huygens crater, which is 467 kilometers (290 miles) in diameter. The excavations by the impacts that dug first Huygens and then the smaller crater have exposed material in this image that had been buried an estimated 5 kilometers (3 miles) deep. The carbonates may be from part of an extensive buried layer that could hold much of the carbon that was once in a thick Martian atmosphere of carbon dioxide, some researchers propose. Mars now has a thin atmosphere that is mostly carbon dioxide, but evidence that liquid water was once widespread on the surface suggests the atmosphere was much thicker billions of years ago.

The High Resolution Imaging Science Experiment (HiRISE) camera on NASA's Mars Reconnaissance Orbiter provided this image. Identification of iron or calcium carbonates at this site, and also of clay minerals indicating a formerly wet environment, comes from an observation by the Compact Reconnaissance Imaging Spectrometer for Mars (CRISM) on the same orbiter. In the presence of water and other conditions, carbon dioxide in the atmosphere can be captured into carbonate minerals.

The image is presented in false color, making differences in surface composition more visible than they would appear to the human eye. It combines information collected separately in red, blue-green, and near-infrared wavelengths.

HiRISE is operated by the University of Arizona, Tucson. The instrument was built by Ball Aerospace & Technologies Corp., Boulder, Colo. The Johns Hopkins University Applied Physics Laboratory, Laurel, Md., led the effort to build the CRISM instrument and operates CRISM in coordination with an international team of researchers from universities, government and the private sector. NASA's Jet Propulsion Laboratory, a division of the California Institute of Technology in Pasadena, manages the Mars Reconnaissance Orbiter for NASA's Science Mission Directorate, Washington. Lockheed Martin Space Systems, Denver, is NASA's industry partner for the mission and built the spacecraft.