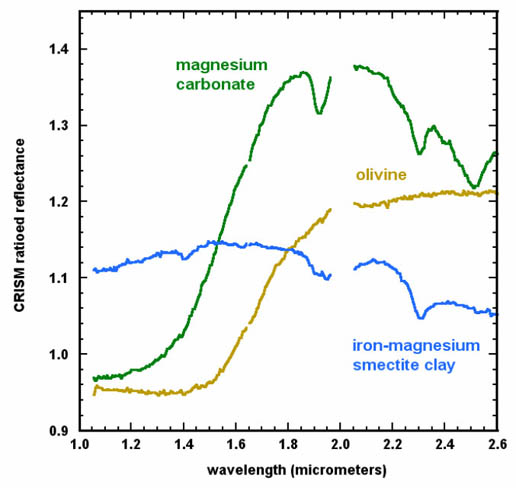 Spectra collected by the Compact Reconnaissance Imaging Spectrometer for Mars (CRISM) indicate the presence of three distinct minerals. The graphed information comes from an observation of terrain in the Nili Fossae area of northern Mars. CRISM is one of six science instruments on NASA's Mars Reconnaissance Orbiter.

Iron-magnesium smectite clay is formed through alteration of rocks by liquid water and is characterized by distinctive absorptions at 1.4, 1.9, and 2.3 micrometers due to water (H2O) and OH in the atomic structure of the mineral. Olivine is an iron magnesium silicate and primary igneous mineral, and water is not in its structure. Its spectrum is characterized by a strong and broad absorption at 1.0 micrometer due to ferrous iron (Fe2+). Carbonate is an alteration mineral identified by the distinctive paired absorptions at 2.3 and 2.5 micrometers. The precise band positions at 2.31 and 2.51 micrometers identify the carbonate at this location as magnesium carbonate. The broad 1.0 micrometer band indicates some small amount of ferrous iron is also present and the feature at 1.9 micrometers indicates the presence of water. CRISM researchers believe the magnesium carbonate found in the Nili Fossae region formed from alteration of olivine by water.

The data come from a CRISM image catalogued as FRT00003E12. The spectra shown here are five-pixel-by-five-pixel averages of CRISM L-detector spectra taken from three different areas within the image that have then been ratioed to a five-pixel-by-five-pixel common denominator spectrum taken from a spectrally unremarkable area with no distinctive mineralogic signatures. This technique highlights the spectral contrasts between regions due to their unique mineralogy. The spectral wavelengths near 2.0 micrometers are affected by atmospheric absorptions and have been removed for clarity.

NASA's Jet Propulsion Laboratory, a division of the California Institute of Technology, Pasadena, manages the Mars Reconnaissance Orbiter for the NASA Science Mission Directorate, Washington. Lockheed Martin Space Systems, Denver, is the prime contractor for the project and built the spacecraft. The Johns Hopkins University Applied Physics Laboratory led the effort to build the CRISM instrument and operates CRISM in coordination with an international team of researchers from universities, government and the private sector.