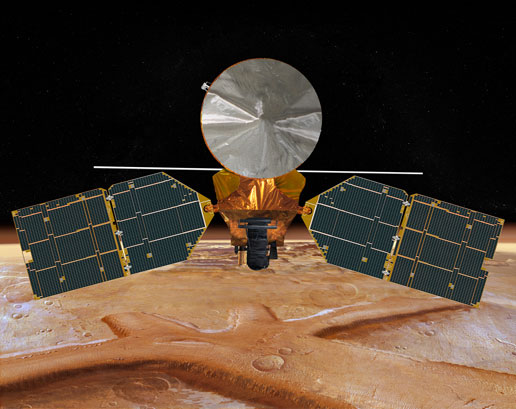 This artist's concept of the Mars Reconnaissance Orbiter features the spacecraft's main bus facing down, toward the red planet. The large silver circular feature above the spacecraft bus is the high-gain antenna, the spacecraft's main means of communicating with both Earth and other spacecraft. The long, thin pole behind the bus is the SHARAD antenna. Seeking liquid or frozen water, SHARAD will probe the subsurface using radar waves at a 15-25 MHz frequency band, "seeing" in the first few hundreds of feet (up to 1 kilometer) of Mars' crust. The large instrument (covered in black thermal blanketing) in the center is the HiRISE camera. This powerful camera will provide the highest-resolution images from orbit to date.