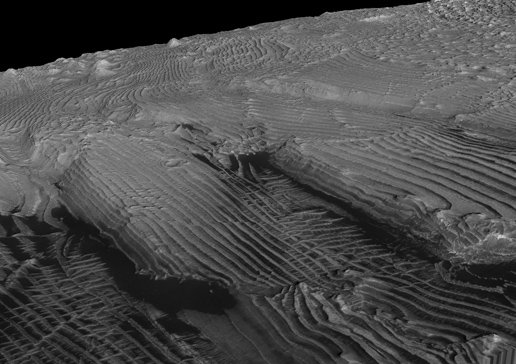 This oblique view of periodic layering in Martian sedimentary layers was derived from three-dimensional modeling based on a stereo pair of images taken by the High Resolution Imaging Science Experiment (HiRISE) camera on NASA's Mars Reconnaissance Orbiter. The vertical dimension is exaggerated by a factor of two.

It shows the regularity in repetition of layers with approximately the same thickness. Individual layers in the area average about 10 meters (33 feet) in thickness.

The location of the imaged area is at 8 degrees north latitude, 353 degrees east longitude, inside an unnamed crater within the Arabia Terra region.

Some of the same layers visible in the right-side half of this view are the layers that can be seen in the center of a sample view from the original HiRISE image of this area. [link to image "1161870fig1_unannotated.jpg"]