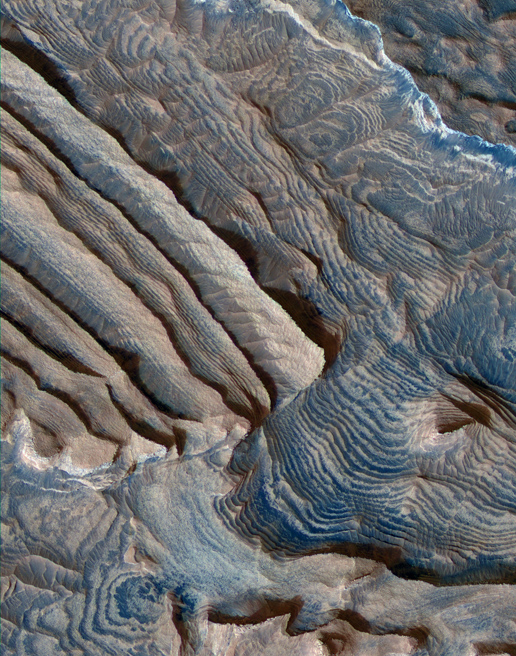 Rhythmic bedding in sedimentary bedrock within Becquerel crater on Mars is suggested by the patterns in this image from the High Resolution Imaging Science Experiment (HiRISE) camera on NASA's Mars Reconnaissance Orbiter.

Three dimensional analysis based on stereo pairs of images confirmed the regularity of repetition in the thickness of the beds. In the left half of this image, some of the rhythm is apparent as a series of bundles of about 10 individual layers per bundle. By corresponding to a known 10-to-one pattern in changes in the tilt of Mars' rotation axis, this pattern suggests the periodicity in the rock layers results from cyclical changes in the planet's tilt.

Faulting apparent in the image suggests that the deposits are hardened rock, not softer material. Tilting of the layers in different ways and the surface topography made the three-dimensional analysis necessary for determining the thickness of layers.

This image is a portion of the HiRISE image catalogued as PSP_004078_2015, taken on June 10, 2007. The location of the imaged area is at 22 degrees north latitude, 352 degrees east longitude, within the Arabia Terra region.