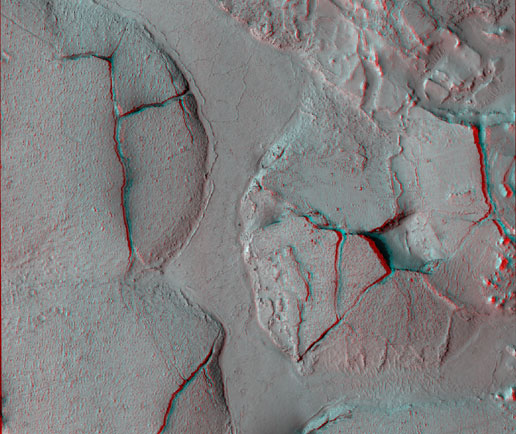 This is one example of 362 stereo views posted by the HiRISE team on Dec. 8, 2008, at http://hirise.lpl.arizona.edu/anaglyphs. This view spans an area about 6 kilometers (3.7 miles) wide.

The mounds on the southern edge of Elysium Planitia are typically a few kilometers or miles in diameter and about 60 meters (200 feet) tall. Fractures that crisscross their surfaces are dilational (extensional) in nature, suggesting that the mounds formed by localized uplift (i.e., they were pushed up from below). The three-dimensional perspective shows that the uplift is not uniform along a fracture and can favor one side.

The mounds are probably composed of solidified lava. They are contiguous with, and texturally similar to, flood lavas that blanket much of Elysium Planitia. Where dilation cracks provide cross-sectional exposure, the uplifted material is rocky.

Patches of mechanically weak and disrupted material overlie the rocky mound material. This is particularly conspicuous in the northeast corner of the image. These patches may be remnants of a layer that was once more continuous but has been extensively eroded. Smooth lava plains fill the low-lying areas between the mounds. They are riddled with sinuous pressure ridges. The entire area is covered by a relatively thin layer of dust and sand.