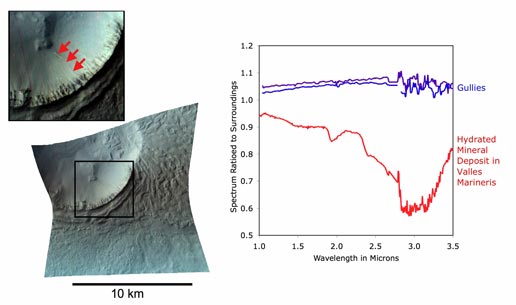 This image of the Centauri-Hellas Montes region was taken by the Compact Reconnaissance Imaging Spectrometer for Mars (CRISM) at 2107 UTC (4:07 p.m. EST) on Jan. 9, 2007, near 38.41 degrees south latitude, 96.81 degrees east longitude. CRISM's image was taken in 544 colors covering 0.36-3.92 micrometers, and shows features as small as 20 meters (66 feet) across. The region covered is slightly wider than 10 kilometers (6.2 miles) at its narrowest point.

Narrow gullies found on hills and crater walls in many mid-latitude regions of Mars have been interpreted previously as cut by geologically "recent" running water, meaning water that flowed on Mars long after impact cratering, tectonic forces, volcanism or other processes created the underlying landforms. Some gullies even eroded into sand dunes, which would date their formation at thousands to millions of years ago, or less. In fact, Mars Orbiter Camera (MOC) images showed two of the gullies have bright deposits near their downslope ends - but those deposits were absent in images taken just a few years earlier. The bright deposits must have formed within the period 1999-2004.

Has there been running water on Mars so recently? To address that question, CRISM and MRO's other instruments observed the bright gully deposits. CRISM's objective was to determine if the bright deposits contained salts left behind from water evaporating into Mars' thin air. The high-resolution imager's (HiRISE's) objective was to determine if the small-scale morphology was consistent with formation by running water.

This CRISM image of a bright gully deposit was constructed by showing 2.53, 1.50, and 1.08 micrometer light in the red, green, and blue image planes. CRISM can just resolve the deposits (highlighted by arrows in the inset), which are only a few tens of meters (about 150 feet) across. The spectrum of the deposits barely differs from that of the surrounding material, and is just a little brighter. This difference could simply be explained by a slightly greater content of dust than in the surrounding soil. In contrast, older deposits elsewhere on Mars ( such as Valles Marineris) that do contain hydrated salts have distinctive spectral features near 1.9 and 3.0 microns. The gully deposits lack these features, and exhibit no evidence for water-deposited salts. Just-published HiRISE images of this and other bright gully deposits do not rule out water, but they do suggest that the bright deposits could also have formed by dust that slid downslope and accumulated in the gullies.

CRISM's mission: Find the spectral fingerprints of aqueous and hydrothermal deposits and map the geology, composition and stratigraphy of surface features. The instrument will also watch the seasonal variations in Martian dust and ice aerosols, and water content in surface materials — leading to new understanding of the climate.