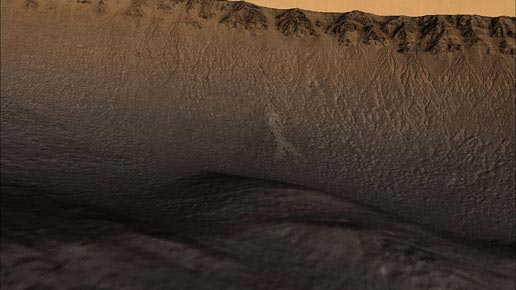 This video uses three-dimensional modeling of a gullied crater in the Centauri Montes region of Mars and simulates a flight over that landscape. One gully inside the crater has a deposit of light-toned material that was not present in 1999 but appeared by 2004, as determined from before-and-after images taken by the Mars Orbiter Camera on NASA's Mars Global Surveyor. The deposit is several hundred meters or yards long.

The imagery and stereo information for this video come from images taken on Dec. 12, 2006, by the High Resolution Imaging Science Experiment (HiRISE) camera and the Context Camera (CTX) on NASA's Mars Reconnaissance Orbiter. The HiRISE image is catalogued as PSP_001714_1415 .

The location of this crater is at about 38 degrees south latitude, 97 degrees east longitude.

NASA's Jet Propulsion Laboratory, a division of the California Institute of Technology in Pasadena, manages the Mars Reconnaissance Orbiter for NASA's Science Mission Directorate, Washington. Lockheed Martin Space Systems, Denver, is the prime contractor for the project and built the spacecraft. The High Resolution Imaging Science Experiment is operated by the University of Arizona, Tucson, and the instrument was built by Ball Aerospace and Technology Corp., Boulder, Colo. The Context Camera was provided and is operated by Malin Space Science Systems, San Diego.