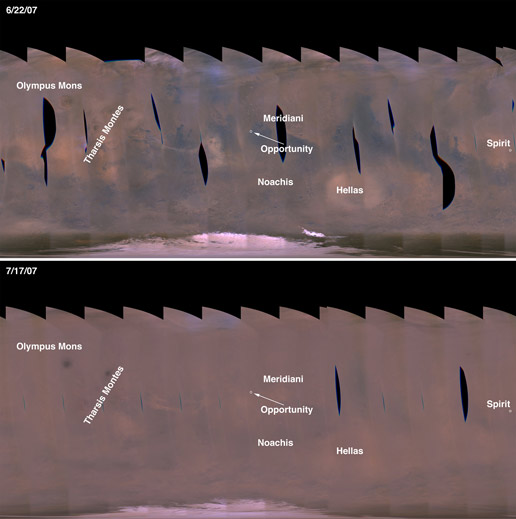 Since late June 2007, Mars has been having a series of regional dust storms. The dust raised by these individual storms has obscured most of the planet over the past few weeks. The two maps shown here are mosaics of images acquired by the Mars Reconnaissance Orbiter (MRO) Mars Color Imager (MARCI) on two days separated by about 3 and a half weeks. The first, on 22 June, shows that there was a dust storm occurring near the east end of the Valles Marineris trough system (left of the label for "Opportunity" in the map). This was the first in the series of storms. The second mosaic shows how Mars appeared on 17 July, after dust was lofted high into the atmosphere by several regional storms and countless smaller, local dust storms.

Each map was constructed from 13 pole-to-pole image swaths at red, green, and blue wavelengths acquired by the MRO MARCI. The maps are simple cylindrical projections, with north at the top and south at the bottom. Each image swath was acquired at about 3 p.m. local time on Mars over the course of 13 orbits. The black gaps occur in the MARCI data at places where the MRO spacecraft was slewed east or west to point its instruments at a specific target of scientific interest. The north polar region is not shown because winter began on 4 July and the north polar region is in wintertime darkness. Key features labeled on the maps include the Tharsis Montes and Olympus Mons volcanoes, the Hellas impact basin, Noachis Terra, Sinus Meridiani, and the two Mars Exploration Rover (MER) landing sites, Opportunity and Spirit. The dust storms, and the planet-encircling dust veil they generated, has greatly reduced the amount of sunlight available to run the two solar-powered rovers. 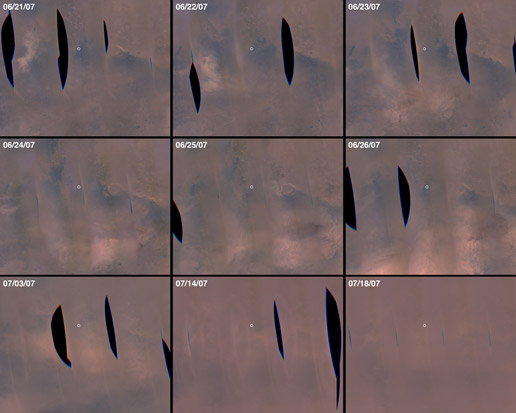 This sequence of Mars Reconnaissance Orbiter (MRO) Mars Color Imager (MARCI) daily mosaics shows some of the dust storm activity that occurred near the Mars Exploration Rover (MER) Opportunity landing site between 21 June 2007 and 18 July 2007. The Opportunity rover is located near the martian prime meridian and equator. The top and middle rows of images show the first six days of dust storm activity near the rover site as dust advanced from the west to the south and passed south of the rover over the course of a week. By the end of that first week, storm activity strengthened and continued to move east, eventually passing over nearly half of the martian southern hemisphere. Other storms spawned by this atmospheric disturbance affected the MER Spirit rover on the other side of the planet, while new storms developed, approached, and affected Opportunity. The bottom three images show dust activity over the MER Opportunity site on 3, 14, and 18 July. By 19 July, most of the martian surface was obscured by the dust lofted from these storms. As with previous large dust-raising events on Mars, once the active storms die down, many weeks to months will pass before the dust settles out and the atmosphere clears. The white circle indicates the location of the Opportunity landing site, the black gaps are caused by slewing the spacecraft east or west to image specific science targets, and north in each picture is toward the top, west is to the left.

Image credit: NASA/JPL/MSSS
›Back To Top