Phyllosilicate and Olivine Around a Fracture in Nili Fossae 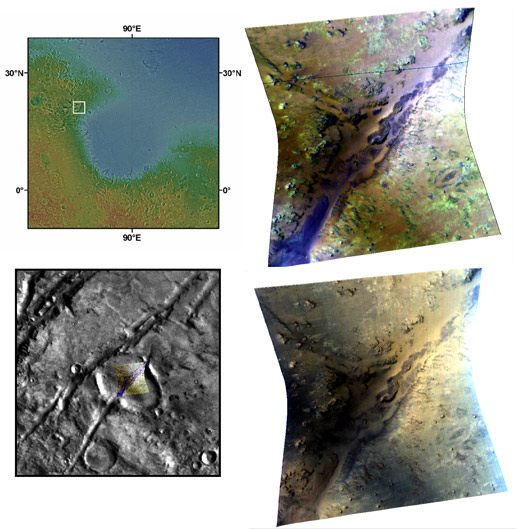 The Compact Reconnaissance Imaging Spectrometer for Mars (CRISM) took this observation of part of the Nili Fossae region at the western margin of the Isidis impact basin at 3:07 (UTC) on December 12, 2006, near 21.9 degrees north latitude, 78.2 degrees east longitude. The image was taken in 544 colors covering 0.36-3.92 micrometers, and shows features as small as 18 meters (60 feet) across. The image is about 11 kilometers (7 miles) wide at its narrowest point.

The Isidis basin resulted from a gigantic impact on the surface of Mars early in the planet’s history. The image of the Isidis basin at the top left is the colored elevation data from the Mars Orbiter Laser Altimeter (MOLA) overlain on a digital image mosaic from the Viking mission. Reds represent higher elevations, and blue lower elevations. The western rim of the Isidis basin has numerous, concentric troughs (or “fossae”) which may have formed during faulting associated with the impact event. Since then, the Nili Fossae region has since been heavily eroded, and is one of the most mineralogically diverse spots on Mars.

Overlaying CRISM data with images from the High-Resolution Imaging Science Experiment (HiRISE) camera shows that the phyllosilicates are in small, eroded outcrops of rock. The olivine is most abundant in sand dunes on the surface. The use of these two instruments together reveals more about the history of the region: Olivine sands covered the area shown in the image after the interaction of water and rock formed the phyllosilicates and after the fracture formed.

+ High-resolution JPEG (2Mb)
›Back To Top