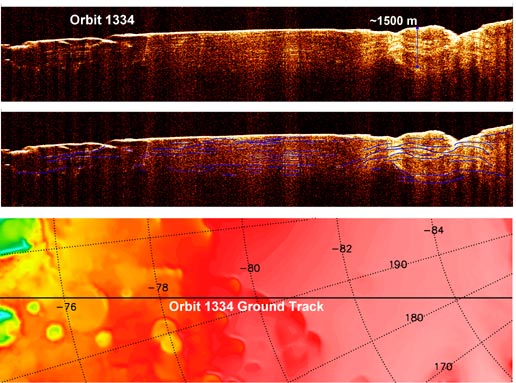 A radargram from the Shallow Subsurface Radar instrument (SHARAD) on NASA's Mars Reconnaissance Orbiter is shown in the upper panel and reveals detailed structure in the polar layered deposits of the south pole of Mars.

The sounding radar collected the data presented here during orbit 1334 of the mission, on Nov. 8, 2006.

The horizontal scale in the radargram is distance along the ground track. It can be referenced to the ground track map shown in the lower panel. The radar traversed from about 75 to 85 degrees south latitude, or about 590 kilometers (370 miles). The ground track map shows elevation measured by the Mars Orbiter Laser Altimeter on NASA's Mars Global Surveyor orbiter. Green indicates low elevation; reddish-white indicates higher elevation. The traverse proceeds up onto a plateau formed by the layers.

The vertical scale on the radargram is time delay of the radar signals reflected back to Mars Reconnaissance Orbiter from the surface and subsurface. For reference, using an assumed velocity of the radar waves in the subsurface, time is converted to depth below the surface at one place: about 1,500 meters (5,000 feet) to one of the deeper subsurface reflectors. The color scale varies from black for weak reflections to white for strong reflections.

The middle panel shows mapping of the major subsurface reflectors, some of which can be traced for a distance of 100 kilometers (60 miles) or more. The layers are not all horizontal and the reflectors are not always parallel to one another. Some of this is due to variations in surface elevation, which produce differing velocity path lengths for different reflector depths. However, some of this behavior is due to spatial variations in the deposition and removal of material in the layered deposits, a result of the recent climate history of Mars.

The Shallow Subsurface Radar was provided by the Italian Space Agency (ASI). Its operations are led by the University of Rome and its data are analyzed by a joint U.S.-Italian science team. NASA's Jet Propulsion Laboratory, a division of the California Institute of Technology, Pasadena, manages the Mars Reconnaissance Orbiter for the NASA Science Mission Directorate, Washington.

+ High resolution TIFF
›Back To Top