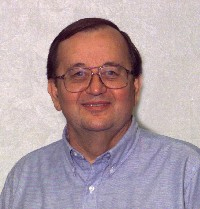 LRO Project Scientist Dr. Richard Vondrak At NASA's Goddard Space Flight Center in Greenbelt, Maryland, Dr. Richard R. Vondrak is the Lunar Reconnaissance Orbiter project scientist, the researcher responsible for the scientific integrity of the mission. He is also the deputy director of the Solar System Exploration Division, and responsible for research and flight projects in planetary science, astrochemistry, astrobiology and space geodesy. Previously, he served as the first director of the Robotic Lunar Exploration Program at NASA Headquarters. Prior to that he was the chief of the Laboratory for Extraterrestrial Physics at Goddard.

He received his bachelor's degree in physics from the University of California at Berkeley and his doctorate in space physics and astronomy from Rice University. His doctoral research was a rocket-borne measurement of electrical currents in the aurora borealis, which was followed by a postdoctoral research position in Stockholm, Sweden. He returned to Rice University for a research position in lunar science, and worked in the ALSEP Science Operations Center during the last three Apollo missions. He then joined the Stanford Research Institute for research in ionospheric and magnetospheric physics. Later he joined the Space Sciences Laboratory at the Lockheed Palo Alto Research Laboratory, ultimately becoming the director of space physics.

Vondrak is the recipient of the Presidential Award for Meritorious Senior Executives, the NASA Outstanding Leadership Medal, the NASA Excellence in Outreach Award, and 12 NASA Group Achievement Awards. He is a fellow of the American Institute of Aeronautics and Astronautics and a member of several other professional societies. He has served on numerous advisory committees for NASA, other government agencies, universities and international organizations.

His primary research interests are in lunar science, including lunar volatiles and the interaction of the solar wind with the moon, and in space plasma physics, particularly the electrodynamics of the aurora. He has published more than 130 papers in scientific and technical journals, and presented more than 300 papers at national or international scientific conferences.
› Back To Top