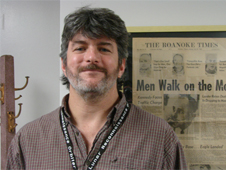 Previously, Tooley was the head of the Hubble Space Telescope Instrument Development Office at Goddard. In this capacity he oversaw the development of instruments installed in Hubble during the fourth servicing mission in May 2009. During his Hubble tenure, Tooley also worked as part of the EVA Servicing Team, which developed procedures and trained astronauts for the successful fourth Hubble servicing mission in 2002. EVA stands for "extravehicular activity," commonly called spacewalks. Prior to Hubble, Tooley served as the deputy project manager for the Triana Project. Tooley has served as the mission manager and mechanical lead for five successful shuttle-borne, solar science Spartan missions, and he held the position of associate branch head of the Carrier Systems Branch. Prior to that he worked as an engineer the Mechanical, Attitude Control and Stabilization, and the Mission Analysis groups at Goddard. Tooley has been employed by NASA since 1983 and has a background in mechanical engineering. He earned a bachelor's in mechanical engineering from the University of Evansville and a master's in mechanical engineering from the University of Maryland.
› Back To Top