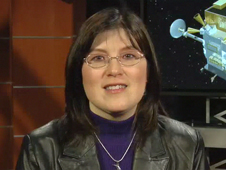 LRO Deputy Project Manager Catherine Peddie. Credit: NASA Catherine Peddie is the deputy project manager for the Lunar Reconnaissance Orbiter Project at NASA's Goddard Space Flight Center in Greenbelt, Md. The LRO Project is NASA’s first step in returning humans to the moon. LRO focuses on the selection of safe landing sites, identification of lunar resources, and the study of how the lunar radiation environment will affect humans. The LRO mission builds and expands upon past lunar missions and will provide a comprehensive atlas of the moon as well as other data sets that will facilitate and support further human space exploration.

Prior to her current position, Peddie served as the deputy director for the Office of Strategic Management at NASA's Glenn Research Center in Cleveland, Ohio. OSM worked closely with Glenn senior management to ensure integration of the center’s development activities into comprehensive technical and business strategies and plans. Peddie also served as the assistant manager of the Ultra Efficient Engine Technology Program Office. UEET was a national program that developed critical technologies for low emission propulsion systems. The UEET Office also had program management responsibility for high-mach propulsion efforts such as turbine-based combined cycle (TBCC) systems for the next generation of turbine engines. She led the High Speed Research Phase IIA Engine Technology Demonstration Program. During her tenure at Glenn, Peddie also served as project manager for several microgravity space shuttle experiments and on the Space Station Freedom Program.

Before coming to NASA, Peddie served in the Air Force as a Flight Commander responsible for supervision and mission direction of a 12-person crew. She was responsible for the command of 3 on-orbit satellites and associated ground stations. She was hand-picked to bring a new satellite operations center online in 1989 and helped establish the first operating procedures.

Peddie enjoys public speaking, especially to young people about science and engineering. She has been a presenter for NASA’s Distance Learning Program and was featured several times on Cleveland Public Television’s Career Explorations Program. Peddie has been a keynote speaker and panelist for the Women in Science Program at Cuyahoga Community College in Ohio. She has also been a mentor for the Women in Engineering Program at the University of Akron, a mentor for the NASA K-12 program, and a mentor for the Goddard and Glenn Mentoring Programs. Peddie has also been featured in NASA’s ASK Magazine.

Ms. Peddie is a native of Makakilo, Hawaii, and in her spare time enjoys many recreational activities with her husband, Andrew, including swimming, golfing and kayaking.
› Back To Top