Grow Text SizeShrink Text Size
Treasure Hunting on the Moon: LRO and the Search for Water 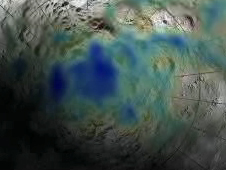 In 1998 NASA's Lunar Prospector mission used the presence of hydrogen as a sign of potential ice deposits. As you can see in this video, Prospector data showed significantly more hydrogen at the south pole of the moon. LRO will build on this data and narrow down the regions that may contain water ice deposits. Credit: NASA's Goddard Space Flight Center's Scientific Visualization Studio
> Download animation
A bottle of one of the most expensive brands of water costs $40, and is presented in a frosted glass container decorated with crystal. On the moon, a bottle of water would run about $50,000, and forget about that heavy crystal glass. That's because it costs around $50,000 per pound to launch anything to the moon. Discovering water on the moon would be like finding a gold mine.

In fact, scientists have discovered evidence for water or hydrogen, a component of water, in special places on the moon. Since the moon is not tilted much from its rotation axis, the depths of certain craters in the lunar poles may not have seen the sun for billions of years. The long night over these areas, called Permanently Shaded Regions (PSRs), will have made them very cold, and able to trap hydrogen or water molecules as ice.

However, with almost no atmosphere, most of the moon is drier than the driest terrestrial desert. How could water get on the moon in the first place? Some scientists believe water vapor from past comet impacts has migrated across the lunar surface to the poles to become embedded in the soil at the bottom of these dark craters. Others believe hydrogen was also embedded in the lunar soil in these polar cold traps over time. The hydrogen comes from the sun and is carried to the moon by the solar wind, a thin gas that's continuously blowing off of the solar surface and fills the entire solar system. Most of the solar wind is hydrogen.

"Both methods may have contributed to polar hydrogen or ice deposits," said Dr. Richard Vondrak of NASA's Goddard Space Flight Center in Greenbelt, Md. Vondrak is project scientist for NASA's Lunar Reconnaissance Orbiter, or LRO. Among its many missions, the spacecraft will help identify the most likely places to find hydrogen or ice deposits on the moon.

Lunar water could be used for more than just drinking. It could be broken down into hydrogen and oxygen for use as rocket fuel and breathable air. Even sufficient concentrations of hydrogen by itself would be valuable because it could be used as fuel or combined with oxygen from the soil to make water. 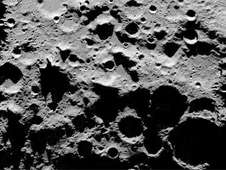 There are certain spots in deep craters at the moon's poles where the sun may not have hit for billions of years. These areas, called Permanently Shadowed Regions, may be able to trap water molecules as ice. This video shows how even as the sun hits from different angles, some parts never receive light. Credit: NASA/JPL
> Download animation With launch costs so high, it will be much cheaper to mine the moon for hydrogen or ice than to haul water up from Earth. Naturally, this assumes there's enough of this resource there, and it's technically feasible to mine. As useful as lunar water deposits would be, without evidence that they exist, they are just wishful thinking by mission planners.

Clementine, a small probe launched by NASA and the U.S. Department of Defense in 1994, gave the first piece of evidence. The probe directed a radio transmitter toward the lunar polar regions, and antennas at Earth picked up the reflections. "The Clementine scientists said the signal indicated the presence of ice, but others questioned that interpretation, claiming rough ground could give the same signal," said Vondrak.

More evidence came in 1998 from NASA's Lunar Prospector mission. The measurement used the presence of hydrogen as a sign of potential ice deposits. The moon is constantly hit by cosmic rays, particles moving at almost the speed of light that come from explosions on the sun and in space. These particles strike the lunar soil and, like the break at the start of a pool game, create a shower of other particles. Neutrons, a component of the center of atoms, are among these particles, and some fly back out into space.

These neutrons were detected by an instrument on Lunar Prospector. The neutrons scattered back into space normally have a wide range of speeds. However, if the neutrons hit hydrogen atoms in the lunar soil before being ejected into space, the impact will quickly slow them down.

"A neutron has about the same mass as a hydrogen atom, so when they collide, the neutron loses most of its speed instantly, just as the collision between a speeding cue ball and another billiard ball often leaves the cue ball standing still," explains Vondrak. 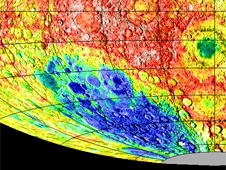 A part of the moon called the South Pole-Aitken Basin (shown here in blue on a lunar topography image), is a giant impact crater that may hold many potential spots to find lunar ice deposits. Credit: NASA
> Larger image As Lunar Prospector scanned the lunar surface, its neutron counters recorded the number of neutrons moving at speeds in the middle of the range. Over the polar regions, the counters detected a decrease in the number of neutrons moving at mid-range speeds. This meant that many neutrons were being suddenly slowed by impacts with hydrogen, so there is probably a concentration of hydrogen or even water ice somewhere in the lunar poles.

However, the measurements could not tell whether the deposits were hydrogen or ice, nor did they have the resolution to accurately locate the deposits within the polar zones. LRO will be able to do both.

LRO has a camera system with both wide-angle and high-resolution cameras, called the Lunar Reconnaissance Orbiter Camera (LROC). As LRO orbits over the poles, the moon rotates beneath the spacecraft, and the cameras will gradually build up a detailed picture of the region. Scientists using LROC will combine the images it takes during a year in orbit to make a movie that reveals the regions in permanent shadow (PSRs). These areas will be the most promising places to search for hydrogen or ice.

The spacecraft also has a neutron detector with much better resolution than Lunar Prospector's, called the Lunar Exploration Neutron Detector (LEND). The detector can locate hydrogen deposits to an area about 10 kilometers (about 6.2 miles) across. This is smaller than the estimated size of most PSRs.

LEND will be able to detect hydrogen or ice that's buried up to about a meter (3.2 feet) below the surface. The deposits are expected to be gradually buried by material thrown out from tiny micrometeorite impacts that constantly bombard the moon.

"This burial, called gardening, actually preserves the deposits, because otherwise they would be slowly liberated back into space by cosmic ray hits and ultraviolet light from stars," said Vondrak. "Of course, the deposits directly hit by the micrometeorite are vaporized, but the impact zone is a very tiny area -- deposits are more likely to be covered by impact material."

LRO's Diviner instrument measures temperature. It will be directed at the PSRs to see if they are really cold enough to trap hydrogen or water molecules for billions of years.

PSR temperature depends on the shape and depth of the craters. Although the bottoms may be in permanent shadow, the sun is likely to rise high enough to appear over the rims and illuminate the sides. Sunlight reflected from the sides could strike the bottom and warm it enough so that any ice would evaporate before it can be buried.

LRO includes a laser ranging system that will build an elevation map to show the contours of the polar craters. The instrument, called the Lunar Orbiter Laser Altimeter (LOLA), records the time it takes for a laser pulse to travel from the spacecraft to the lunar surface and back to calculate the height of the lunar terrain. After a year in orbit aboard LRO, LOLA will have created an elevation map of the polar regions that is accurate to within a half-meter (20 inches) vertically and 50 meters (about 160 feet) horizontally. It will be used to rule out craters with the wrong shape to store hydrogen or ice.

PSRs will, of course, be dark. The job of LRO's Lyman Alpha Mapping Project (LAMP) is to see in the dark. It is sensitive enough to make pictures of the crater depths using reflected light from stars and glowing interstellar gas (actually a specific type of ultraviolet light, called Lyman Alpha, which like all ultraviolet light is invisible to the human eye). Also, any ice on the surface of the PSRs will leave a distinct imprint in the reflected light, definitively revealing its presence.

An experimental radio transmitter and receiver on board LRO, called Mini-RF, also could detect ice deposits on the surface and beneath it as well. Ice deposits will change the reflected radio signal in a specific way, revealing their presence.

Finally, LRO has a companion spacecraft, called the Lunar Crater Observation and Sensing Satellite (LCROSS), which will be deliberately crashed into a polar crater. The resulting plume of material from the impact will be observed by LRO and telescopes on Earth for evidence of hydrogen or water.

There will actually be two chances to test for water this way, because there will be two impacts -- the first from the upper stage of the rocket that carried LRO and LCROSS to the moon, which also will be observed by LCROSS, and the second from LCROSS itself.

"Multiple instruments and spacecraft are the power of the LRO mission -- we can verify that water or hydrogen is there with several independent techniques," said Vondrak. Bill Steigerwald
NASA's Goddard Space Flight Center
› Back To Top