WASHINGTON -- NASA's Lunar Reconnaissance Orbiter (LRO) team released Tuesday the final set of data from the mission's exploration phase along with the first measurements from its new life as a science satellite.

With this fifth release of data, striking new images and maps have been added to the already comprehensive collection of raw lunar data and high-level products, including mosaic images, that LRO has made possible. The spacecraft's seven instruments delivered more than 192 terabytes of data with an unprecedented level of detail. It would take approximately 41,000 typical DVDs to hold the new LRO data set. 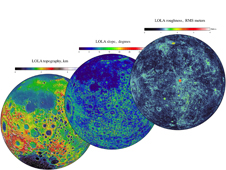 LOLA data give us three complementary views of the near side of the moon: the topography (left) along with new maps of the surface slope values (middle) and the roughness of the topography (right). All three views are centered on the relatively young impact crater Tycho, with the Orientale basin on the left side.

The slope magnitude indicates the steepness of terrain, while roughness indicates the presence of large blocks, both of which are important for surface operations.

Lunar topography is the primary measurement being provided, while ancillary datasets are steadily being filled in at the kilometer scale. 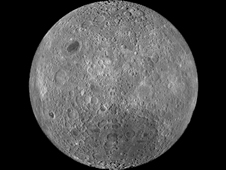 The lunar farside as never seen before! LROC WAC orthographic projection centered at 180° longitude, 0° latitude Credit: NASA/Goddard/Arizona State University
› Larger image "The release of such a comprehensive and rich collection of data, maps and images reinforces the tremendous success we have had with LRO in the Exploration Systems Mission Directorate and with lunar science," said Michael Wargo, chief lunar scientist of the Exploration Systems Mission Directorate at NASA Headquarters in Washington.

Among the latest products is a global map with a resolution of 100 meters per pixel from the Lunar Reconnaissance Orbiter Camera (LROC). To enhance the topography of the moon, this map was made from images collected when the sun angle was low on the horizon. Armchair astronauts can zoom in to full resolution with any of the mosaics—quite a feat considering that each is 34,748 pixels by 34,748 pixels, or approximately 1.1 gigabytes.

"Because the moon is so close and because we have a dedicated ground station, we are able to bring back as much data from LRO as from all the other planetary missions combined," said LRO Project Scientist Richard Vondrak of NASA's Goddard Space Flight Center in Greenbelt, Md.

LRO's Diviner Lunar Radiometer Experiment is providing new data relating to the moon's surface. These include maps of visual and infrared brightness, temperature, rock abundance, nighttime soil temperature and surface mineralogy. The data are in the form of more than 1700 digital maps at a range of resolutions that can be overlaid easily on other lunar data sets.

The Lyman-Alpha Mapping Project, which collects information to help identify surface water-ice deposits, especially in permanently-shadowed regions of the moon, also has new data. This release includes new maps of far-ultraviolet (FUV) brightness, albedo and water-ice data as well as instrument exposure, illumination and other conditions.

As a complement to the high-resolution digital elevation maps, representing 3.4 billion measurements already released by the Lunar Orbiter Laser Altimeter team, the group is delivering new maps of slope, roughness and illumination conditions. New maps from the Lunar Exploration Neutron Detector, and the latest data from the Cosmic Ray Telescope for the Effects of Radiation and the Miniature Radio Frequency instruments, also are featured.

"All these global maps and other data are available at a very high resolution -- that's what makes this release exciting," said Goddard's John Keller, the LRO deputy project scientist. "With this valuable collection, researchers worldwide are getting the best view of the moon they have ever had."

The complete data set contains the raw information and high-level products such as mosaic images and maps. The data set also includes more than 300,000 calibrated data records released by LROC. All of the final records from the exploration phase, which lasted from Sept. 15, 2009 through Sept. 15, 2010, are available through several of the Planetary Data System nodes and the LROC website.

LRO was built and is managed by Goddard. The exploration phase was funded by NASA's Exploration Systems Missions Directorate. LRO operates under NASA's Science Mission Directorate. For more information about LRO, visit:
www.nasa.gov/lro