Robot Scout: Fly Me (Safely) to the Moon
The first attempt to land humans on the moon -- Apollo 11 -- was a triumph that almost ended in disaster. At just 400 feet from the lunar surface, with only about a minute's worth of fuel remaining, astronauts Neil Armstrong and Edwin "Buzz" Aldrin saw that their ship's computer was taking them directly into a crater the size of a football field, strewn with SUV-sized boulders. They quickly took control from the computer, flew over the crater and touched down in a smoother area beyond, cutting the engine with just 30 seconds of fuel on the readout. 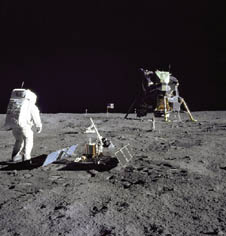 Astronaut Edwin E."Buzz" Aldrin Jr., Lunar Module pilot, surveys the Apollo 11 landing site on July 20, 1969. He has just deployed the Early Apollo Scientific Experiments Package, with the Passive Seismic Experiment Package next to him. The Lunar Module "Eagle" is in the far right background. Credit: NASA/Neil A. Armstrong, Lunar Module commander.
Print-resolution copy
As good as they were for their time (1960s), NASA's navigation capabilities weren't good enough to avoid this nasty surprise. The landings for NASA's return to the moon are likely to be even more challenging. Mission planners want to be able to set down on the edge of enormous craters in the polar regions, because the crater rims will be bathed in gentle but nearly-permanent sunlight. Steady sunshine provides a reliable source of power for long-term expeditions.

However, "There's not a lot of real estate there," says John Keller of NASA's Goddard Space Flight Center in Greenbelt, Md. In other words, there's little room for error, or surprises.

Keller is deputy project scientist for a robotic scout that will reduce the risk that comes with these daring landings – NASA's Lunar Reconnaissance Orbiter, or LRO. "LRO's instruments will work together to build a complete, detailed picture of potential landing sites," says Keller.

In general, good landing sites need to be level and free from large boulders that could damage or tip the spacecraft as it attempts to land. But they also need to be close to interesting areas, either for exploration and science, or for access to resources. The Apollo missions were pure exploration and science, and landed at various sites near the lunar equator. NASA's return to the moon is more ambitious, and planners are aiming at the poles not just for the science, but for the potential to use the moon's resources to "live off the land": Such resources include oxygen and hydrogen, and also the lunar soil (regolith) for berms and radiation shielding.

Steady sunlight at the poles offers the valuable resource of reliable power. "Of course, you can rely on solar power during the day, but it's very difficult to provide enough batteries to store the charge needed to last through a lunar night, which is about two weeks long," says LRO project scientist Richard Vondrak of Goddard. "In fact, instruments left on the moon by the Apollo astronauts relied on nuclear power to get through the night. But at the poles, solar energy could be the main source of power because the sun is almost always above the horizon. There may even be areas on crater rims and mountains where the sun hasn't set for eons, called Permanently Illuminated Regions (PIRs)."

So reliable power and potential lunar resources make the lunar poles attractive enough to attempt hairy landings on a crater rim. It's up to LRO to make those landings as safe as possible. 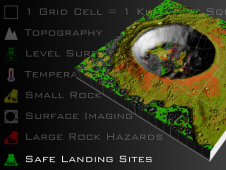 This is a simulated map of safe landing areas around a large lunar crater, representing those that will be created using data from LRO. The green regions are designated as possible safe landing zones after LRO's instruments have scanned the surface for various hazards, such as steep slopes, extreme temperatures and rocky terrain. Once the maps have been created, mission planners will choose safe zones that are also scientifically interesting or are near possible resources. Credit: NASA/Goddard Scientific Visualization Studio.
> Watch streaming video
> Larger image of simulated map The first task is to get a good look at the poles. LRO features a camera, called the Wide Angle Camera (WAC), which will use color filters to give information on possible resources based on the colors reflected from the lunar surface. It will also combine the images it takes over a year in orbit to make a movie that reveals areas getting the most sunlight, including any PIRs. The movie will also show the regions in permanent shadow, called Permanently Shaded Regions (PSRs). These very cold areas will be the most promising places to search for hydrogen or ice.

LRO also carries a pair of eagle-eyed cameras, called the Narrow Angle Cameras (NACs) which together can take images that reveal details as small as a meter (almost 40 inches) over swaths 10 kilometers (about 6.2 miles) wide. As LRO orbits over the poles, the moon rotates beneath the spacecraft, and the NACs gradually build up a detailed picture of the region. It will be used to identify safe landing zones free of large boulders and craters, allowing astronauts to avoid surprises like those during Apollo 11.

LRO will use data from another instrument that measures temperatures to double-check the safe zone map. Temperatures change more slowly in areas with loose materials (lots of rocks), because the loose material is not well connected to the surface. By analyzing how quickly temperatures change in potential landing zones, planners using the instrument, named Diviner, can rule out areas that appear smooth but actually are likely to be rocky.

Astronauts also want to avoid places with steep slopes that could tip the spacecraft, so LRO includes a laser ranging system that will build an elevation map to show the contours of the polar surface. The instrument, called the Lunar Orbiter Laser Altimeter (LOLA), records the time it takes for a laser pulse to travel from the spacecraft to the lunar surface and back to calculate the height of the lunar terrain. After a year in orbit aboard LRO, LOLA will have created an elevation map of the polar regions that is accurate to within a half-meter (almost 20 inches) vertically and 50 meters (about 160 feet) horizontally.

LOLA will also be used to double-check surface roughness. If the surface is smooth, the reflected laser signal will sharply rise in intensity. If it is rough, the signal will be ragged; the intensity will go up and down as the laser scatters off of rocks at different angles.

However, in order to precisely calculate LRO's distance from the lunar surface, scientists have to know its position in space accurately. Mission scientists will track LRO with two techniques, one using radio transmissions from the spacecraft measured by a dedicated antenna at NASA's White Sands Test Facility, Las Cruces, N.M., complemented by measurements from antennas at other stations. The second tracking method uses lasers fired at the spacecraft from Goddard.

LRO is being assembled and managed by Goddard and is scheduled to be launched in March of 2009. NASA plans to have astronauts back on the moon by 2020. As astronauts close in on a narrow crater rim late in the next decade, they can thank NASA Goddard's small robot scout for showing the safest approach.